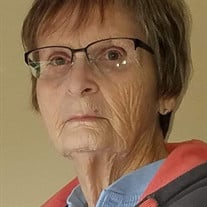 Pamela J Merkley passed away peacefully in her sleep on August 1, 2019 Pamela Jean Merkley was born on March 15, 1949 in Antioch, California to James and Kathleen Steele, after Kathleen's passing her father met Arlyce Marrow and they were married on January 16, 1954. During Pam's life her dad was in the Air force which meant Pam was able to experience living around the world. James retired from the Air force in 1963 and they settled in Wenatchee, Washington, were Pam attended school. After graduating high school in 1967, Pam moved to Seattle to take a job in banking. While living in Seattle she met Stan Lalk in Bremerton, Washington and they married on April 16, 1969. Shortly after their marriage Stan's sister moved in with them and lived with them until she married. Stan and Pam settled in Moses Lake, Washington after he retired from the Marines. During this time Pam and Stan were blessed with two children. On July 26, 2003 Pam married Nolen Merkley. During Pam's life she worked in banking, insurance and her true passion home health care, which she just retired from at the beginning of the year. She will be greatly missed by all who knew her, whether if it was as a foster parent, an aunt, a sister, a friend or as a grandmother. Pam is survived by her husband Nolen Merkley, children Cheryl (Jason) & Kevin (Audra) and grandson Douglas Chornuk as well as several foster children she stayed in contact with, Her mom Arlyce Steele of East Wenatchee Her older brother Larry Jim (Judi) Steele of Joplin MO, Jackie (Laren) Lamb of East Wenatchee, William Steele of East Wenatchee, Kimberly Steele of East Wenatchee, Tammy (Jeff) Crace of Otis Orchard, Along with several nieces and nephews. Pam is preceded in death by both of her natural parents and sister in law Jean Brooks. Service will be held at the Jesus Christ of Latter Day Saints Rose Street Chapel in Moses Lake, WA. on August 9, 2019 at 10 AM. Graveside service to follow

Pamela J Merkley passed away peacefully in her sleep on August 1, 2019 Pamela Jean Merkley was born on March 15, 1949 in Antioch, California to James and Kathleen Steele, after Kathleen's passing her father met Arlyce Marrow and they were married... View Obituary & Service Information

The family of Pamela J Merkley created this Life Tributes page to make it easy to share your memories.

Pamela J Merkley passed away peacefully in her sleep on August...