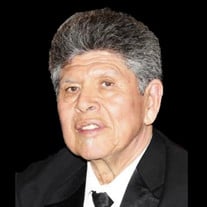 Pablo Martinez Jr. peacefully surrendered his life to the Lord the morning of March 21st, 2019 surrounded by his family. After a long valiant battle with complications stemmed from a stroke in September 2011, Paul is at rest. Paul was born November 3rd 1949 to the late Pablo and Amada Martinez in Marked Tree, Arkansas. They would make their journey north and settle in Moses Lake, Washington in 1955. Paul was the oldest of his siblings: Lusina†, Federico†, Hermelinda Williams (Moses Lake), Oralia Perez (Moses Lake), Jessie Martinez (Moses Lake), and Pete Martinez (Moses Lake). There is where he attended schooling and graduated from Moses Lake High School class of 1968. Paul started working for the Liquor Store in 1975 and dedicated 21 years of service as Manager. Through his job he shined at his natural ability, which was, the craft of conversation. He was a people person. He, on many occasions, was asked for his expertise advice on which beverage would complement a special event, dinner, taste palette or budget. Paul was charismatic and could carry a conversation with anyone. He never met a stranger. Paul’s first child born in 1972 was a son named, Christopher. In 1980, Paul married Gloria (Guzman) Martinez. Together they shared 17 years of marriage and 3 children: Monica, Paul and Roxanne. Paul was an exceptional father. He was kind, patient and a great provider. He was attentive, firm, and supportive. All of his children were special to him. He loved them unconditionally. Prior to Paul’s health condition, he spent a lot of time building, reconstructing and renovating. There wasn’t a skill Paul couldn’t master. If it could be built, Paul could do it. He enjoyed helping his family and friends with his work. He found great satisfaction in their happiness. Paul was true and honored his many friendships with a sincere heart. His generosity never went unnoticed. Many people have said that Paul was like a “father-figure”. He would take care of you, console you, feed you, scold you or offer advice. Paul received the best in-home care possible by his beloved sisters Hermelinda and Oralia. For 7½ years, they dedicated their life to him. They ensured his needs were met and he was a top priority. Paul was extremely blessed to have selfless, caring, devoted sisters. A special thank you to the years of care provided by his caregivers, Bertha Bustillos and Gloria Rodriguez. Thank you Assured Home Hospice of Moses Lake for the assistance and transition during Paul’s final days. Thank you Kayser’s Chapel of Memories for arrangements under your care. Services will be held on Wednesday, March 27th at Our Lady of Fatima Catholic Church, 200 N. Dale Rd. Rosary at 10:00AM, Mass at 10:30AM. Inurnment will follow in the columbarium and luncheon will be provided. Paul is survived by his children: Christopher Paul Martinez-Campos, Monica Lisa Martinez (Javier Solis), Paul Alex Martinez, and Roxanne Mirie Martinez (Manuel Benavidez). Grandchildren: Clarrisa, Louis, Michelah, Anthony, Devenni, Evalina, Avaiyah, Belena, Manuel, Maribel, Delani, and 4 great grandchildren. Paul is preceeded in death by his parents Pablo and Amada Martinez, siblings Lusina and Federico Martinez, godparents Jose and Lolita Gama, and several extended family members. By the grace and mercy of our Heavenly Father, Paul has reunited with his loved ones. As a son, brother, father, cousin, uncle and friend, Paul was respected and loved. In return, he gave much more. “People People”… you will be missed tremendously.

Pablo Martinez Jr. peacefully surrendered his life to the Lord the morning of March 21st, 2019 surrounded by his family. After a long valiant battle with complications stemmed from a stroke in September 2011, Paul is at rest. Paul was born... View Obituary & Service Information

The family of Pablo Martinez created this Life Tributes page to make it easy to share your memories.

Pablo Martinez Jr. peacefully surrendered his life to the Lord...