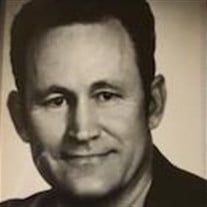 Oscar John Ferrians, 91, died on December 19, 2019, at his home in Moses Lake after a courageous battle with cancer. Oscar was born on March 9, 1928 in Touchet, Washington, to Oscar John Sr. and Mary Lucretia, “Tish” Ferrians. He was the youngest of five siblings. He spent his younger years in Touchet, WA. He attended school in Touchet, and participated in all sports. Oscar graduated from Touchet High School and then attended Washington State University, where he graduated with a Master’s Degree in Geology. While attending WSU, Oscar married Muriel Halloway. They were happily married until she passed on October 27, 1991. Oscar started work for the United States Geological Survey, Alaska Terrain and Permafrost Section in 1953. He was in charge of research in the Copper River Basin. A great portion of Oscar’s work was mapping much of the state of Alaska. Oscar was the U.S. Geological Survey Representative during the planning and construction of the Alaskan Pipeline. The U.S. Geological Survey sent Oscar many times to Russia and China, including many other parts of the world as diplomatic scientific exchanges. Oscar is regarded as one of the foremost experts on permafrost. Russia is 75% permafrost, therefore, his expertise was highly regarded. Oscar’s career took him to Washington DC for several years. He worked behind the infamous, “Green Door”. His work at this time was considered classified and top secret. A body of Oscar’s work is housed at the University of Alaska. This includes many maps, journals, and photos. He worked for the USGS for 40 years, retiring in 1993. Oscar is a member of Sigma Gamma Epsilon, a national society for the earth sciences. Oscar was lucky to find love again and married Louise Nichols on August 5, 2005. Together they traveled extensively, and cruising was their favorite. They were great travel companions. Louise also enjoyed watching sports which was one of Oscar’s favorite pastimes in later life. They resided at their homes in Anchorage Alaska, and Murphy’s California before moving to Angel’s Camp Assisted Living where Louise passed away in their home on August 5, 2018. Upon her passing, Oscar moved back to Washington where he could be closer to family. Oscar always felt he was blessed in his life and felt education was important. He set up an endowment to Washington State University and Touchet High School. One student from Touchet and four students from WSU received scholarships this year. Students will benefit from Oscar’s generosity for years to come. Family was important to Oscar. All of his nieces and nephews have benefited from his generosity. Oscar was preceded in death by his father Oscar John Ferrians, mother Mary Lucretia, brothers Francis and Ronald, sisters Margaret (hillier) and Evelyn (Allan). He leaves behind step-children Diane Pope (Ken), Larry Nichols (Janet), Greg Nichols and Sharon Haymond (Bob), and several loving nieces, nephews, and friends. A celebration of life will be held Saturday, at 11:00 AM, December 28th at Kaysers Chapel of Memories. A gathering will be held at Moses Lake Country Club following the service. Please express your thoughts and memories for the family at kayserschapel.com. Arrangements are under the care of Kaysers Chapel of Memories, Moses Lake, WA

The family of Oscar John Ferrians created this Life Tributes page to make it easy to share your memories.