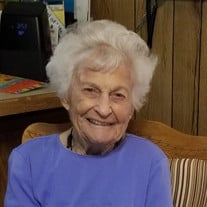 Ora Ferl Steffler Beloved Ora Ferl (Dye) Steffler passed away quietly at her home on February 3, 2022. She was born in Firth, Idaho, on November 20, 1924, to Richard Dye Jr and Marie Birdell Brookbush, at the family home located on the Blackfoot Indian Reservation. She was the middle child of five. Ora met Philip Jacob (Jack) Steffler at a baseball game in the early 1940’s at Firth high school. He and his family, consisting of 10 siblings and their father, had recently moved from Devils Lake, North Dakota. On November 22, 1942, Jack and Ora wed before a justice of the peace with a brother and sister-in-law as witnesses. They were both 18 years old. Ora is survived by one brother – Richard Dale Dye; and six children: Gary (Verla) Steffler, Paulette (Filiberto) Rivera, Sandra (William Daida) Green, Julia (Johnnie Batten) Steffler, Jackie (John) Sielaff, and Philip (Tara) Steffler; plus many grandchildren, great grandchildren, and a few great, great grandchildren. Ora was preceded in death by her parents and three siblings; husband Jack; children Diane Hernandez, Brian Steffler, and Paul Steffler; and grandchildren Keri Todaro and Philip Hernandez. Ora & Jack were members of the Church of Jesus Christ of Latter-Day Saints and were sealed together on November 22, 1961, in the Idaho Falls, Idaho, temple. The same month and day as their civil marriage. Jack and Ora raised their family of nine children on farms in the Firth and Moreland areas of Idaho. In 1968 they formed a partnership known as Lucky Six Farms (consisting of the three Dye sisters and their husbands) and moved to Bruneau, Idaho (near Mountain Home) to farm potatoes. The following year they moved to Moses Lake, WA, growing potatoes again in the Black Sands area just off I-90 at Dodson Road. Ora supported Jack on the farm in any way she could. We remember her baling hay, picking rocks, moving handlines, cutting potatoes, helping with harvest, and preparing hot lunches for the crew. Ora’s days were filled with caring for her children, home, garden, and helping on the farm. When a free moment was found she instructed church primary children, was active in The Farm Bureau and pursued personal hobbies of crocheting and sewing clothes for the family. Her children were taught how to work, share, and treat each other with kindness. Mom/Grandma was the glue of our family dynamics - she will be deeply missed. Our gratitude to Assured Hospice, children, and grandchildren who cared for her with love and respect. A memorial service will be held February 11, 2022, at 11:00 a.m. at the Rose Street Chapel, 1036 W. Rose, Moses Lake. Viewing will be at 10:00 a.m. at this same location. Masking protocol is requested. Live streaming is available at https://facebook.com/events/s/sacrament-meeting/1488523341529211. Condolences can be sent to www.Kayserschapel.com. In lieu of flowers donations can be sent to Assured Hospice, 1417 S Pioneer Way, Moses Lake, WA 98837.

Ora Ferl Steffler Beloved Ora Ferl (Dye) Steffler passed away quietly at her home on February 3, 2022. She was born in Firth, Idaho, on November 20, 1924, to Richard Dye Jr and Marie Birdell Brookbush, at the family home located on the Blackfoot... View Obituary & Service Information

The family of Ora Ferl Steffler created this Life Tributes page to make it easy to share your memories.