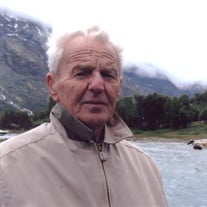 Olaf Odegaard, 94, of Moses Lake, died in his home, surrounded by family on March 17, 2017. Olaf was born on March 24, 1922 on a farm in Rodenes, Norway to Iver and Ingeborg Odegaard. He was the oldest of five children. As a child, he was remembered as being very busy, always having multiple activities going on at once. Olaf attended school until the age of 14, then worked on the family farm.He attended an agricultural college, worked on the farm and helped with the resistance during WWII while Norway was occupied by Germany. In 1951, when Olaf was 29 years old he came to America under the sponsorship of a fisherman friend. He arrived by boat to New York, then traveled by bus to Seattle where he reunited with Norwegian friends. Olaf spent his first year in America working on a dairy farm in Eatonville, he then spent four years in Alaska working on salmon traps. During his first years in America Olaf enjoyed spending winter months ski jumping. In 1956 Olaf and his lifelong friend, Rolf Dilling, leased an alfalfa farm in Block 40, north of Moses Lake. The Christmas of 1957 Olaf met Grethe Ekern, who was also Norwegian. The two were married on June 14, 1958. Olaf and Rolf farmed together for 9 years, and during that time Olaf and Grethe welcomed a daughter, Karen, and a son, Iver. In 1965, Olaf took over the farm. He later started a cattle operation after joining the Block 40 Grazing Association with six other families. Olaf continued to farm until he was 70 years old. Olaf was an active member of the Sons of Norway and the Block 40 Community Club. Olaf was well known for his welcoming nature and hospitality, he enjoyed spending time with neighbors and friends. His daily 10 am coffee hour around the Odegaard kitchen table is well known and attended by many. He was a dedicated member of Immanuel Lutheran Church, for over 50 years, where he always arrived early and sat in the same pew. Later he became a member of Living Word Lutheran Church. He was a man of faith and was diligent in seeing that his children and grandchildren attended church. Olaf made many trips back to Norway over the years, but never returned permanently, as once was planned. Moses Lake, and the farm, ended up being a better fit for his forever home. During one of his trips, he attended the Winter Olympics in Lillehammer in 1994. He also took his grandchildren to Norway when they were 12 to show them where he grew up. He last visited Norway in 2013. Olaf is survived by his wife of 58 years, Grethe Odegaard, his children Karen Starr (Joel) of Vancouver, WA and Iver Odegaard (Laurie) of Moses Lake, WA. His six grandchildren: Mariel Weed (Nathan), Jessica Aboulhosn (Fadi), Lars Odegaard, Annalise Courtright (Jake), Kurt Starr, and Andrew Starr, and his three great grandchildren: Brady, Logan, and Cameron Weed. His brother Sigurd Odegaard of Ballard, WA and his sister Synnove of Mysen, Norway. Cousin Tulla Dilling of Moses Lake and her four children Marta, Harald, Lars, and Erik. He is preceded in death by his brothers Johannes Odegaard of Rodenes, Norway, and Alf Odegaard of Oslo, Norway. A Memorial service is scheduled for Saturday March 25th at 1 pm, at Living Word Lutheran Church in Moses Lake. In lieu of flowers donations can be made to the Block 40 Scholarship Fund. Special thanks to Assured Hospice, and all friends and family for your support. Please sign the online guestbook or leave a note for the family at www.kayserschapel.com Arrangements are in care of Kayser's Chapel & Crematory.

Olaf Odegaard, 94, of Moses Lake, died in his home, surrounded by family on March 17, 2017. Olaf was born on March 24, 1922 on a farm in Rodenes, Norway to Iver and Ingeborg Odegaard. He was the oldest of five children. As a child, he was remembered... View Obituary & Service Information

The family of Olaf Odegaard created this Life Tributes page to make it easy to share your memories.

Olaf Odegaard, 94, of Moses Lake, died in his home, surrounded...