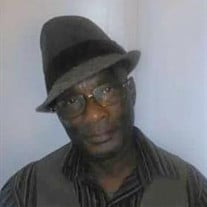 Odell Robinson was born to Collir “Bob” and Rasir Robinson on October 25th, 1942 in North Brook Township, North Carolina. Later in life he started a family and sang in a gospel group in the Washington D.C. area. In the early 1980’s he moved to Moses Lake, WA with his father. In the early 90’s he committed his life to the Lord and begin serving in the church. He was 74 when he departed this life at home with his wife on April 15th, 2017 after battling an illness. Odell was a strong family man, Father and believer in the Lord. He enjoyed serving on the Deacon board, good gospel music, singing, going to church, visiting the sick and elderly, working on things around the house and always stayed busy. He was well known in the community and could be called upon at any time. Serving and helping others is what he enjoyed most. Odell will be greatly missed by his family and friends. He leaves behind to cherish his memories his wife, Jude Eylander-Robinson (Moses Lake, WA) Sister-Dorothy Mae Jackson-McCoy (Rock Hill, SC), Three Sons: William Jackson Jr. (Rock Hill, SC), Donnell Robinson (Fort Lawn, SC), James Robinson (Seattle, WA), Three Daughters: Teresa White (Charlotte, NC), Dawn (Donna) Robinson (Washington D.C.), Trina Ademofe (Seattle, WA), a host of grandchildren, great grandchildren, nieces and nephews. He is preceded in death by his Mother, Rosa Mae McCurry and Father, Bob Robinson. Memorial Service will be on April 22nd, 2017-11AM at New Bride Missionary Baptist Church, 4125 Fairview Place NE, Moses Lake, WA 98837. Fellowship meal will be directly after the service at New Bride MBC. Arrangements are in care of Kayser's Chapel & Crematory. Please sign the online guestbook or leave a note for the family at www.kaysershchapel.com

The family of Odell Robinson created this Life Tributes page to make it easy to share your memories.

Odell Robinson was born to Collir “Bob” and Rasir Robinson on...