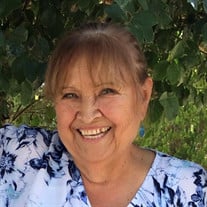 Our beloved mother, grandmother, sister, aunt, and friend Obdulia (Lula) Estrada, 69, of Warden, passed away on November 17, 2020 at Central Washington Hospital. Lula was born in Crystal City, Texas to Eduardo and Belia Melendrez on February 27, 1951. She was one of 10 children. As a child, Lula learned the value of hard work and love of family from her parents, who were migrant workers and traveled to various states to provide for their family. In 1973, Lula and her husband moved to Washington State in pursuit of opportunity. They settled in the small farming town of Warden, where they raised all four of their children and went on to eventually own their own family farm. Lula’s most impactful roles were as mother to her four children, and grandmother to her eight grandchildren. For them, she forged a home of love and laughter. Lula enjoyed supporting her grandchildren at their various events, such as musical concerts and sporting games. She gladly cheered them and had no problem calling out the injustice of an official who disagreed with her grandchild’s play! Lula loved the holidays. She insisted on cooking and hosting at her home. Lula wanted her home filled with love (and those in it to have full bellies). Feeding her loved ones was her way of loving them and homemade comfort foods were the order of the day in her home. One of her favorite holiday’s was Easter. A fun, if messy, Easter tradition she passed on was a love for cascarones (confetti eggs). Lula didn’t mind the effort to make them, nor did she mind having an egg cracked over her head because it always led to such great laughter. For Lula, the mess was always worth the memories. Lula loved to play card games and puzzles with family and friends. Countless hours were passed and many laughs had at her kitchen table, at one game or another. Lula enjoyed antiquing and thrifting; buying gently used items and breathing new life into them, such as repainting garden figurines. Lula took tremendous pride in her gardening and fruit trees. She would take photos of her beautiful flowers, sharing the fruits of her labor with neighbors, family, and friends. Lula cared deeply for her family and friends. She was a strong, hard-working, passionate figure, who soldiered on, even when times were tough. Even as her health suffered, her inner light continued to shine, masking whatever personal discomfort she experienced. Regardless of the circumstance, she found joy surrounded by loved ones. With her unconditional love, generosity, and compassion, Lula touched the lives of many. She was loved dearly, and her smile, laughter, wit, charm, strength, and grace will be forever missed. Lula was preceded in death by her parents, sister Mary, sister Margarita and brother Joe. Lula is survived by her children Enrique Estrada III, Belia (Bryce) McPartland, Steve (Aja) Estrada, and Cynthia Estrada; Grandchildren Gaelen McPartland, Kiera McPartland, Owen McPartland, Aidan McPartland, Josh Estrada, Sidney Estrada, Sloane Estrada, and Eli Estrada; Siblings Moises Ramirez Sr., Jose (Joe) Melendrez, Mage Guerrero, Eduardo Melendrez Jr., Josefa Llanes, Beatrice Franco, and Anita Huerta and numerous nieces and nephews.

The family of Obdulia M Estrada created this Life Tributes page to make it easy to share your memories.