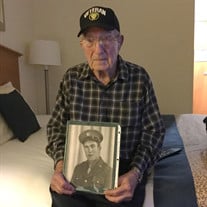 Norris Navale Wood, 97, longtime resident of Moses Lake passed away Monday October 2, 2018 at Central Washington Hospital in Wenatchee, Washington. Graveside services with military honors will be held at 2:00 P.M Thursday, October 11, 2018 at the Pioneer Memorial Gardens. Family will greet friends at the Grape Drive Chapel, Church of Jesus Christ of Latter Day Saints from 3:30 to 5:00 P.M. Arrangements are in care of Kayser’s Chapel and Crematory, Moses Lake. Memorials will be held at later dates, one in Moses Lake at a time to be announced, and one in Kansas at an annual Wood family reunion. Norris Wood was born May 2, 1921 near Natoma, Kansas to Everett and Myra (Kirby) Wood, the second of 10 siblings. There were also 4 older step-siblings. The family farmed in the North/central part of Kansas, and he with his siblings attended a two-room country school outside Lucas, Kansas. One of his aunts was the “school marm” who also lived in the Wood household when she taught there, and Norris said she was teaching him at the age of three at home. When he started formal school, there were no other first grade students, so he was advanced to second grade. Although his formal education did not go beyond the 8th grade, as was normal in that day and time, his help was needed with maintaining the farms. He would pass his GED with highest marks later in life. He tells of living in Oklahoma, Colorado, and other Midwest locations as his father hired out harvesting for other farmers. His dad built a “the original travel trailer” on the back of their old truck where they would live as they traveled about the country. Norris joined the CCC’s (Civilian Conservation Corps)in 1940, and worked approximately 6 months as “common laborer” in Oklahoma and was honorably discharged prior to enlisting in the Army. In July, 1942 he enlisted in the Army. He served in the Pacific Theater at Luzon, Phillipines in the 37th Quartermaster Company, where he was shipping and receiving clerk at the time of his honorable discharge in December, 1945. He also had experience with the antitank gun crew, and trained in Basic Intelligence. Norris moved to Caldwell, Idaho with a brother where he worked for John Deere as a large machine mechanic. It was there he met and married Marye Ruth Rietz on February 28, 1952. (She would not be married on the 29th.) She had an 8-year old daughter, Marye K (Katie) and a 6-year old son, Richard (Rick). He was a good father to them, and adopted them when he and his wife adopted another son, Mel in 1962. In 1953, the family moved to Washington State, where Norris worked with the Latham Construction Company, a family business, building roads and canals in the Columbia Basin Project with his father-in-law and two brothers-in law. They moved from Othello to Eltopia, to Quincy, and finally back to Othello where he built the house his family lived in until about 1964 working as a car mechanic. Norris, Marye Ruth and Mel moved to Moses Lake where Norris worked several years for Ford Auto as a mechanic, and later as fork-lift mechanic at Simplot’s/Carnation/Nestle. Norris was very talented as mechanic, carpenter and handyman. There seemed to be nothing he could not fix. If family or friends were unable to figure something out he was willing and often did repair it. He was a quiet man with a dry sense of humor, and once in a while had a mischievous streak. He and his wife were square dancers with the Othello Twirlers. Norris also was an avid bowler. He bowled on several leagues for several years until he was about 95 years old and with a fairly good average that could put many bowlers to shame. The family made annual trips to Kansas for family reunions. It was rumored that he never went there the same way twice, and many beautiful parts of the country were enjoyed as he, with family traveled over much of the United States. After retirement, Norris and Marye Ruth traveled extensively with their travel trailer until her death in 2006. He then continued going to the annual Wood family reunions later traveling there with his daughter, Katie to help with driving. Norris is survived and will be greatly missed by his three children, Marye “Katie” Kendall, Moses Lake, Richard “Rick” (Donna) Rietz, Moses Lake, and Melvin “Mel” Wood (Kathy), Trabuco Canyon, California; two sisters, Atha “Sally” Cooper, Osborn, Kansas, Cenith (John) Cowing, Clay Center, Kansas, two brothers, Arden, Wood, Weymouth, Massachusetts, Loy “Jake” Wood, Kansas City Missouri; eight grandchildren, numerous great grandchildren, nieces and nephews; and Sunshine, his Pomeranian. Donations may be made to local Senior Centers or humanitarian organizations of choice.

The family of Norris Wood created this Life Tributes page to make it easy to share your memories.