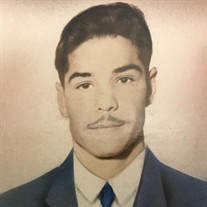 Noe DeLeón, 76, long-time Moses Lake resident went to be with the Lord on Sunday August 13, 2017 at Good Shepherd Medical Center in Hermiston, Oregon. Noe was born on April 7, 1941 along with his twin brother Israel, in Congregación Hidalgo, Nuevo Leon Mexico to Cleotilde and Amelia DeLeón and had 10 siblings. In 1945, his parents moved to the United States and in 1964 he established his residence in Moses Lake, WA. On August 25, 1979, he married the love of his life, Rev. Rebeca Lucio and they made their home in Moses Lake. They have three wonderful children, Noe Jr, Cesar Daniel and Amelia Ruth (his princess). Noe was known for his powerful voice both in song and in prayer. He was a long-time member of 46 years of El Sendero De La Cruz church in Moses Lake where he was a deacon, board member, and usher but more than anything he was known as a mighty man of prayer. When Noe prayed, it seemed like all of heaven would listen as he called on God to heal the sick and to transform lives. Any time that someone was sick, the first person to call was "Hermano Noe." Noe was known for his honesty and his integrity and always wanted to honor God with every decision in his life. He was a great leader but most of all a great husband and a great father. In 2010, his wife answered the call to Pastoral ministry at Templo Abarim in Hermiston, Oregon where once again, "Hermano Noe" would be known for his powerful prayers and whenever people had a need, he was the one they called on for prayer. Both churches that he belonged to in his life loved him greatly because he was very loving and always pointed people to Jesus. Noe is survived by his wife of 38 years, Rev. Rebeca DeLeón of Hermiston, Oregon; sons Noe Jr (Aida) of Moses Lake, Cesar Daniel of Hermiston, and daughter Amelia Ruth of Moses Lake, 3 grandchildren, 3 brothers and 2 sisters. He is preceded in death by his parents Cleotilde and Amelia DeLeón, brothers Alonzo, Eleazar, Israel, Federico and sister Velia Powel. Noe will be missed greatly by all of us; this world was so much better when he was in it and especially when he was on his knees praying for people. He was a man of great faith, great honesty and a prayer warrior and we love him very much. We are blessed to know that he is in heaven right now singing with his parents and worshiping his Savior, Jesus Christ. A celebration service will be held on Monday August 21, 2017 at 10 AM at Sendero Life Center, 2227 W. Peninsula Drive in Moses Lake with internment to follow at Guarding Angels Cemetery. Please sign the online guestbook or leave a note for the family at www.kayserschapel.com Arrangements are in care of Kayser's Chapel & Crematory.

Noe DeLeón, 76, long-time Moses Lake resident went to be with the Lord on Sunday August 13, 2017 at Good Shepherd Medical Center in Hermiston, Oregon. Noe was born on April 7, 1941 along with his twin brother Israel, in Congregación Hidalgo,... View Obituary & Service Information

The family of Noe De Leon created this Life Tributes page to make it easy to share your memories.