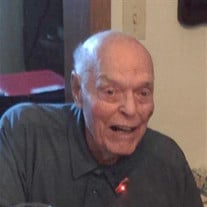 Neal A. Lucke, 94, passed away on Thursday morning, October 13th, 2016 at home with his wife by his side. Neal was born on June 4th, 1922 to Harriet and Lou Lucke in Havre, Montana. Neal grew up in Havre with his four siblings, where he graduated from high school. He attended Northern Montana College for two years and then enlisted in the Army of the United States on September 10, 1942. He was honorably discharged as Staff Sergeant on November 27th, 1945 and was honored with the following decorations and citations: American Theater Ribbon, European-African-Middle Eastern Theater Ribbon, 1 Service Stripe, Good Conduct Medal AR 600-68, Victory Medal, and 4 Overseas Bars. Neal was married to Mary Evelyn Ross in December 1947 in Havre, Montana and was blessed with four children - David, Tom, Jeanne, and Margaret. Neal and Mary Evelyn moved to Moses Lake, Washington in 1956. One of Neal’s passions was retail sales. In 1956, Neal and a partner opened their first retail store, The Shoe Box located on Third Avenue. Some years later they sold the retail store and Neal began a career in Real Estate. Neal also enjoyed being an active member of the Rotary Club. Neal’s first wife Mary Evelyn was a school teacher at Moses Lake High School and passed away in 2001. Neal later met Lillian Taylor and they were united in marriage in 2005. Neal and Lillian lived in Moses Lake, where they enjoyed playing cards and games with their close friends – Floyd Swenson, Betty Wood, and Jim and Bev Skinner, and hosting a variety of celebrations for family and friends. Neal also loved drinking coffee and watching TV – especially football. He was a very loving, sweet, and kind man who surely loved his kisses. Neal was preceded in death by Mary Evelyn, his parents, and his siblings. He is survived by his children, David and Cindy of Spokane, WA, Tom and Becky of Spokane, WA, Jeanne and Tom Davis of Colbert, WA, and Margaret and Dennis Gibbs of Herndon, VA, many grandchildren and great grandchildren. He is also survived by his wife Lillian, her children and their families. Lillian and family would like send a special thank you to Tina Wallo for her kindness and loving care to Neal. A Memorial Service officiated by Paul Wagner will be held Thursday October 20th, 2016 at 2:00 p.m. at the Moses Lake Presbyterian Church, 1142 West Ivy Avenue, Moses Lake, Washington 98837. In lieu of flowers, memorial contributions can be made to Big Bend Community College Foundation.

Neal A. Lucke, 94, passed away on Thursday morning, October 13th, 2016 at home with his wife by his side. Neal was born on June 4th, 1922 to Harriet and Lou Lucke in Havre, Montana. Neal grew up in Havre with his four siblings, where he... View Obituary & Service Information

The family of Neal Lucke created this Life Tributes page to make it easy to share your memories.