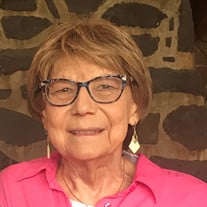 Nayda Kay (Schlien) Littlefield, 74, of Moses Lake, Washington, went to be with the Lord on Wednesday, December 4, 2019. Nayda was a 27 year fighter of breast cancer. Her first bout was in 1992 followed by a 7 year remission and then again in 1999 followed by a 10 year remission. Over the last several years her cancer treatments picked up again as it had metasticized throughout her body. Giving up was not in her vocabulary and she would have wanted to keep fighting but her body would no longer allow it. She was able to enjoy her last Thanksgiving dinner with her family on Friday where she said she was most thankful for her Faith, Family, and Friends. Her last days were spent surrounded by her family and several visitors where there were hugs, kisses, tears, laughter and many prayers. Born on June 11, 1945, in Yakima, WA, she was the second of three daughters to Chester “Chett” and Angie (Olson) Schlien who owned and operated a dairy farm in Mabton, WA. Chett was also a teacher and principal and her mother Angie was a school teacher as well. Nayda was active in 4-H growing up and earned a National 4-H Conference trip to Chicago in 1964. She graduated Mabton High School in 1963 and Washington State University in 1967 with a Bachelor’s Degree in Primary Education. She taught second grade for 33+ years. She resided in Moses Lake since 1967 and was a faithful member of Immanuel Lutheran Church. She married her husband Greg on June 10, 1972 at their church. Nayda’s primary joy in life was helping others. She took care of everyone else first before tending to herself. She loved being a wife and mother. She was like a mother to everyone including all of her students over the years and her children’s friends. She volunteered and was active giving back to the community. She was a member of AOPi at WSU, and active with her church and Chapter GH in PEO. She also volunteered as a swim official while her daughter swam. She continued to Judge for 4-H at the County Fair even up until this past summer. She was also a Lioness and member of the Lions Club, receiving the Melvin Jones Lifelong Achievement Award. Being a cancer survivor she was an inspiration to many. Everyone would always take note that if she could continue to fight with a positive attitude then so could they, even when she had many reasons to have a ‘pity party’. One of the highlights of her life was being recognized and given the honor to be a torch bearer for the 2002 Winter Olympics because of her continuous positive attitude despite her challenges. Nayda was a ‘social butterfly’. She looked forward to her daily trips to town to play Bridge at the Senior Center, have lunch with the Retired Teachers group or in the hopes to bump into someone she knew. She always found a friend or made a friend. It was uplifting for her to be involved in the community and that is where she gained her strength. Anyone who knew her knows her trademark greeting was “Hi-Ho” followed by a smile and giggle. Nayda is survived by her husband Greg; son Bryce Littlefield (Moses Lake), daughter Kayla Littlefield (Big Sky, MT); bonus daughters Lisa Solomon (West Valley, UT), Erilyn Littlefield (Richfield, UT); grandson Dylan Littlefield (Moses Lake) and sister Marlys Williams and her husband Kirk (Lucas, TX); bonus siblings Tom Smith (Pondery, ID) and Bobbie Sahr and her husband John (Spokane Valley, WA), among many loving friends that she also considered family. Nayda is preceded in death by her parents Chester and Angie Schlien and sister Carolyn Quantrille. A celebration of life service will be held Wednesday, December 11 at 1:00pm at Immanuel Lutheran Church in Moses Lake, Washington. Internment will be at Mabton Cemetery Thursday, December 12 at 1:00pm. In lieu of flowers, memorial donations may be made in her name to the Fred Hutchinson Cancer Research Center or a charity of your choice.

Nayda Kay (Schlien) Littlefield, 74, of Moses Lake, Washington, went to be with the Lord on Wednesday, December 4, 2019. Nayda was a 27 year fighter of breast cancer. Her first bout was in 1992 followed by a 7 year remission and then again in... View Obituary & Service Information

The family of Nayda Kay Littlefield created this Life Tributes page to make it easy to share your memories.