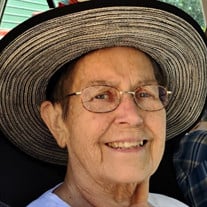 Nancy Lee Bromiley, 82, of Moses Lake, WA, passed into her eternal rest on March 27, 2022. Nancy was born on November 18, 1939 in Whittier, CA. She met the love of her life, John C. Bromiley, while still in high school and they married in June 1957 shortly after her graduation. Nancy and John were inseparable throughout their nearly 65 years of marriage. Nancy and John lived in California for several years, and welcomed two children, Byron and Lee Ann, into their family. When the children were small, the family moved to Lake City, WA, then a few years later to Preston, WA, where John owned a semi-trailer repair business and Nancy worked as a bookkeeper for it and another company. After the kid’s graduations from high school, Nancy and John moved to the outskirts of Mattawa, WA, where they raised alfalfa and tree fruit, and also owned and operated a small sandwich shop with pool table for a few years in town. Soon after retirement from farming, Nancy and John moved to a house next to the home where John grew up on Badger Mountain near East Wenatchee, WA. They moved to Moses Lake, WA, in 2005 and kept themselves occupied raising a very large garden and participating in farmer’s markets for many years. Nancy loved spending time at the many gatherings of her vast family clan in the Wenatchee valley and elsewhere, and at gatherings of friends in Moses Lake, WA. She enjoyed reading, baking for the holidays, freely sharing cookies and other baked goods with family and friends, and creating landscape art paintings. Nancy also canned many jars of fruits and vegetable over the years, and mentored others in the skill of home canning. Nancy is survived by her husband, John C. Bromiley, at the family home in Moses Lake; her son Byron (Sharon) Bromiley of Oakesdale, WA; her daughter Lee Ann (Brian) Bratton of Lind, WA; and her granddaughter Nicole Bratton of Trail City, SD. She was preceded in death by her father and mother, Byron and Winona Charles, and her brother Alvin Charles. A very special thank you to the Odessa Memorial Health Care Center for the care and attention they provided to help Nancy rally in the months before what turned out to be her final days a few short weeks later. At Nancy’s request there will be no formal services. Her cremains will be placed in the Badger Mountain Cemetery at a later date. A potluck gathering of family and friends to celebrate Nancy’s life will be held on April 23, 2022 at the family home in Moses Lake.

Nancy Lee Bromiley, 82, of Moses Lake, WA, passed into her eternal rest on March 27, 2022. Nancy was born on November 18, 1939 in Whittier, CA. She met the love of her life, John C. Bromiley, while still in high school and they married in... View Obituary & Service Information

The family of Nancy Lee Bromiley created this Life Tributes page to make it easy to share your memories.