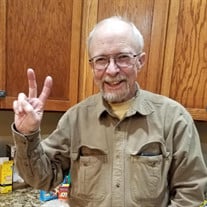 Myron Walker passed away unexpectedly at his home in Moses Lake on August 13, 2020. Myron was born at the U.S. Naval Air Station in Corpus Christi, Texas in 1950. His father was a career Navy man and they lived on many different air bases during his early years until his father retired after twenty years of service. The family settled in the Bremerton area of Washington state. He graduated from South Kitsap High School in 1968. Myron married his high school sweetheart, Lois, in May of 1970 and they recently celebrated their fifty year anniversary. Myron and Lois moved to eastern Washington in the 1970's. He worked for the Milwaukee Railroad for ten years as a signal maintainer, he kept the track signals for the trains and crossing signals on the roads in working order and had ninety miles of territory to cover. When the Milwaukee Railroad went out of business he went to work for the Burlington Northern Railroad until he was hired by the East Columbia Basin Irrigation District, he wanted to be closer to home. He retired from the ECBID as a pump mechanic. Myron served as a Warden City Councilman for over ten years and was happy to support his town and to do what he felt was his civic duty. He lived in Warden for over thirty years and he and his wife Lois raised their daughter Amy there. They moved back to Moses Lake in 2004, a few years before retirement. Myron loved the climate here in eastern Washington. He was an out-of-doors kind of guy and was fond of bird hunting, fishing, boating, target shooting and gardening. In his later years he spent his winter months putting together wooden model airplanes and many other woodworking projects. He spent hours tinkering in his shop. He liked sitting in the open garage in the morning, coffee cup in hand, greeting the neighbors that walked or jogged by. He always asked if they wanted some of his extra garden vegetables during the growing season and would load them up with tomatoes, cucumbers or garlic bulbs which he grew in abundance. Myron was a funny, smart, interesting man with a quirky sense of humor. He could always make people laugh. Myron was preceded in death by his mother Alice Walker, his father Wendell Walker and step-mother Norma Walker. Myron is survived by his wife Lois Walker and his daughter Amy (Justin) Serrano and his two granddaughters Sydney and Brooklyn Serrano of Moses Lake, his sister Shirley Dahlner of North Bend, his sister Helen Conroy (Dan) of Whidbey Island, and his nieces Tahvia and Stacy and nephews Frank, Trevor, Philip and Devin. His nephew Harry preceded him in death. Myron requested that this poem be read, it was the only thing he was specific about: William Ernest Henley (1849-1903) Out Of The Night That Covers Me Out of the night that covers me, Black as the pit from pole to pole, I thank whatever gods may be For my unconquerable soul. In the fell clutch of circumstance I have not winced nor cried aloud. Under the bludgeonings of chance My head is bloody, but unbowed. Beyond this place of wrath and tears Looms but the Horror of the shade, And yet the menace of the years Finds, and shall find, me unafraid. It matters not how strait the gate, How charged with punishments the scroll, I am the master of my fate: I am the captain of my soul.

Myron Walker passed away unexpectedly at his home in Moses Lake on August 13, 2020. Myron was born at the U.S. Naval Air Station in Corpus Christi, Texas in 1950. His father was a career Navy man and they lived on many different air bases... View Obituary & Service Information

The family of Myron Walker created this Life Tributes page to make it easy to share your memories.

Myron Walker passed away unexpectedly at his home in Moses Lake...