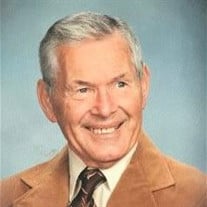 “Mac” (Milton Gaines) McLanahan, 94, was welcomed into Heaven on Sunday, September 9, 2018. Funeral services will be held at 1 p.m., Monday, September 17, 2018 at Kayser's Chapel of Memories with viewing from 10 a.m. to 12:45 p.m. prior to the funeral. Burial will follow in Guarding Angels Cemetery. Sign online guestbook at www.kayserschapel.com Arrangements in care of Kayser's Chapel. Mac was born to Thomas Jefferson and Olive Gaines McLanahan on August 10, 1924 in Greenville South Carolina. He grew up in South Carolina, graduating from high school at age 16 and started college five days after he graduated. He attended Clemson University, where he played football for a year until he broke a shoulder. World War II came along and, at age 18, Mac signed up for the Army Air Corp Reserve. He was sent to college in North Carolina and trained to be a pilot and learn all the different flight positions while flying B24’s. He was later transferred to the Air Force and the military kept him in various training schools across the country for three years. Toward the end of his service, Mac was sent to Walla Walla in 1945 where he met the love of his life, Sally. They were married in North Augusta, South Carolina in 1946. After Mac’s discharge from the service, he decided he’d rather live in Washington State. In 1948, he started a job with General Electric in Richland and later worked for another firm on the first plutonium finishing plant in the 200 area at Hanford. Next he worked five years on the construction of McNary Dam, located on the Columbia River near Umatilla, Ore. Mac commuted up to 180 miles roundtrip daily from Walla Walla, where he and Sally were raising their family. While at Hanford and McNary Dam, he also worked with two different firms during that time, doing field work on relocation behind the dam, construction of the dam powerhouse, and installation of the turbines. In his last two years he became a supervisor with responsibilities to prepare everything for inspection. Sally and Mac were building a house in Walla Walla, which was completed only two weeks before they moved to the Basin in 1955. He went to work for a Yakima firm as an engineering consultant under contract to Moses Lake, Ephrata, Othello, Quincy, Soap Lake and even Ritzville. In May 1957, Mac was working at least 80 hours a week. He became a part-time Moses lake city employee, but he still did consultant work for some of the Basin’s smaller cities. He also worked for Boeing at nights setting up navigational facilities for B-52s and KC-135s. That was also the year Mac studied at home and earned the professional surveyor’s license – only two out of 75 passed the surveyor’s exam. In 1958, Mac’s engineering skills were put to the test when a flood had washed away the only road across Moses Lake – an old wooden two-lane bridge on the Alder Street Fill. From 1958 to 1963, there was no overtime paid to city employees so Mac volunteered to be on 24 hour call. The city had just begun to grow and the officials decided the town was big enough for an engineering department which worked three nights a week doing the design work for projects to be completed the next summer. In 1963, Mac made the move from the engineering department to public works superintendent – taking on responsibility for divisions including streets, water and sewer and equipment rental. In 1974, the city had no public works director, so Mac spent six months doing his job and the director’s job, which included reorganizing the department. Mac then became in charge of special projects for the Municipal Services Department - responsible for writing and administering grants, LIDs and other such things. Mac and Sally built and remodeled seven houses during their 71 year marriage; including the round house in Moses Lake. He coached Little League for years. He was a member of the American Legion; Senior Center; AARP; Retired Public Employees; Deacon of his church; and supported the many community projects Sally was involved in. He loved the Lord, his family, and believed it is important to get involved and participate in your community. Mac is survived by his children: Gerry McLanahan; Larry (Chris) McLanahan; Cherre (Jon) Resh; Tim McLanahan; grandchildren: Anthony (Charisse) McLanahan; Ranen (Kirsten) McLanahan; Maverick, Pacific, and Michael McLanahan; great-grandchildren: Jasmine, Mason, Owen, and Raelle McLanahan.

The family of Milton "Mac" McLanahan created this Life Tributes page to make it easy to share your memories.