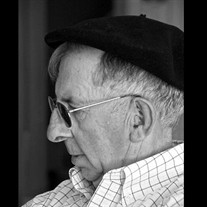 Miguel “Mike” Etulain, 87, passed away peacefully on Thursday, April 19, 2018 at his home in Warden WA, surrounded by family. He was born on July 27, 1930 in Bera de Bidasoa in the Basque province of Navarre. During the Spanish Civil War, his family moved across the border to the small Basque fishing village of Ciboure where he spent his childhood. In 1952, he immigrated to the United States to work on his Uncle Juan’s sheep ranch near Sunnyside, Washington. As his uncle Juan was transitioning out of the sheep business, his Uncle Sebastian introduced him to Cal Courtright in Moses Lake. In 1955, He moved to Warden to work with Cal where he spent the next 30 years working in the cattle industry. In 1961, during a trip back to the Basque Country, he met the love of his life, Prudencia “Prudy” Iriarte. They married a year later and Prudencia followed him to Warden where they raised their four children on the family farm. In 1986 he transitioned to farming full time where he raised alfalfa and other seed crops until he retired in 1997. Mike led a very interesting life. As a young boy, he worked on a farm south of Ciboure to help his family. During WWII, the farm served as one of the safe houses of the “Comet Line,” a French resistance group that helped allied soldiers and airmen escape occupied France. He would rendezvous with the soldiers near the train station in St Jean de Luz, and they would follow him for about five miles to the farmhouse. Here, a guide would lead them safely across the border, over the Pyrenees and eventually to the British Consulate in Bilbao. Mike was a talented woodworker. He built much of the house he shared with Prudencia and much of the furniture inside. He enjoyed fishing with friends and his grandchildren as well as trips up to the Wenatchee forest in search of mushrooms. Mike spoke four languages (English, Spanish, French and Basque) and was proud of his Basque heritage. He could be seen on visits to town wearing his Basque Beret. He was fortunate to make one final trip to his homeland with his family in April of 2017. He was active in the Seattle Basque Club and the Columbia Basin Spanish Club, and was a founding member of the Warden Assembly of God church. Mike is survived by his wife of 55 years, his children Lisa (Rich) Jacobs of Richland; John (Antoinette) of Boise; Daniel of Bangkok, Thailand; Linda (Mike) Clark of Walla Walla; and 10 grandchildren: Catherine, Allison, Scott, Lauren, Claire, Rachel, Alexandria, Jean Mikel, Patxi and Maitexa. Mike is also survived by one sister Carmen Thurin of Ciboure. A memorial service will be held at 2:00 pm on Friday, April 27th at the Assembly at Moses Lake. In lieu of flowers, family asks that you consider a donation to your favorite charity.

The family of Miguel "Mike" Etulain created this Life Tributes page to make it easy to share your memories.