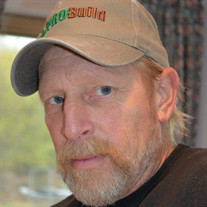 Michael “Mike” Gene Harper, loving husband, father, pompa (grandfather), and friend left us on November 25th, 2021, at age 60, to go home to his Heavenly Father. Mike was born in Everett, WA on November 14, 1961 to Larry Harper and Myrna Griffiths. In 1985 Mike married the love of his life, Laurie and together they had 7 children, Michael, Aaron, Isaac, Katie, Christopher, Josiah, and Lilyann. Mike was a hard worker. He worked many jobs in his youth and fell in love with construction. Mike chased his dreams, moving to Moses Lake in 1990 with his beloved wife Laurie and children. He worked hard and built his own home and his own business, L&M Cornerstone Construction. He was known for his craftsmanship in construction and could not leave without having everything perfect. Mike also found a new hobby he enjoyed, cattle. He began Rocking H Cattle Company. Mike was known for his kindness and charming smile. He was always there for his family and friends. Mike was a humble soul, he attended many charitable events and often donated to charity. He was known to help people he barely knew. He came to Christ back in the year 2000 and has been serving the Lord faithfully ever since. Mike is survived by his wife Laurie Harper, sons, Michael(Jessica), Aaron (Heather), Isaac (Cheyenne), and Josiah, daughter Katie, and his 9 grandchildren. He was preceded in death by his mother Myrna, son Christopher, and daughter Lilyann. A memorial service will be held at 2:00 pm on December 11, 2021 at Grace Harvest Church on 313 North Fig Street in Moses Lake.

The family of Michael "Mike" Gene Harper created this Life Tributes page to make it easy to share your memories.