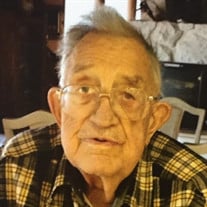 Mervin A. Dexter, lovingly known as Papa, passed peacefully in his home, June 27, 2017. He was fortunate to live out his last years in the dream house he and his wife, Marilyn, built and enjoyed on Moses Lake. Mervin was born March 7, 1925, the son of Laura and Leon Dexter, in Ortonville, Minnesota. As a young child his family lived in the Minnesota area, but later moved to several locations in the Pacific Northwest where he ultimately graduated from Wenatchee High School in 1944. Mervin acquired his strong work ethic starting out with farm labor jobs in his youth wanting to help out his family. At sixteen, he successfully managed a five-acre raspberry farm. Subsequently, he worked at a wide assortment of jobs from tapping maple trees for syrup to pounding cinders on ore cars in Wallace, Idaho. He even picked up culled apples out of the snow in the winter which would be used to make apple cider vinegar. A job that only paid five cents a box. Mervin met his future wife, Marilyn A. McCollum at an Eagles club dance in Wenatchee, Washington and soon they married at a friend’s house on June 26, 1945. They stayed in Wenatchee long enough to bring four children into the world, Forrest, Dennis, Karene, and Kris. In 1951 they were able to purchase their first home in Rock Island on the outskirts of Wenatchee and several years later, they acquired a small home and 10-acre apple orchard in the same area. In addition to working the orchard, Mervin had a long career as a dairy delivery salesman with routes throughout North Central Washington. The company he worked for, Meadowmoor Dairy, changed ownership numerous times ultimately becoming Darigold and Mervin was transferred to Moses Lake in 1965 where he worked until his retirement in the early 80’s. Although he never shied away from hard work and family responsibilities, he made time to develop hobbies that he became passionate about. As an avid fly fisherman, he would spend countless hours on his beloved Entiat River and enjoyed camping trips with family and friends in the Silver Falls area. He also particularly loved floating the Colorado River as well as fly fishing trips in Montana with his sister and brother-in-law. In addition, he enjoyed hunting elk, deer, and small game birds. He liked playing Cribbage and Pinochle with his sons. Mervin was diligent when it came to gardening and got great satisfaction by his success with a wide variety of fruits and vegetables. He felt some pride as he frequently produced ripe tomatoes by the 4th of July. He nurtured various fruit trees which produced ample fruit for his wife’s famous pies! Mervin was a quiet, polite and caring Christian man who lived a life of integrity and high morality. He and Marilyn attended Moses Lake Assembly of God church. After retiring, they wintered in Yuma, relaxing as snowbirds in the Arizona sunshine. Mervin is survived by his sons, Forrest (Debra) of Veradale, Dennis (Lori) of East Wenatchee, Kris (Teresa) of Moses Lake, and his daughter Karene (Dennis) also of Moses Lake. Mervin’s wife of 71 years, Marilyn, preceded him in death, passing in October of 2016. They were blessed with and leave 11 grandchildren and 19 great grandchildren along with numerous nieces and nephews. With the faithful assistance of family and private caregivers, he remained content and happy in their Moses Lake home until his passing. Caregivers who helped him through this last journey include Valentina, Lyudmyla, Marianna, Angela, Dennis Dexter, Dennis and Ryan Richins. The family is forever grateful for the outstanding care he received. The family also wishes to extend a special thank you to Assured Hospice for their service. Papa had a great love for his family. He participated in many activities as his children grew up and continued into the lives of his grandchildren and great grandchildren. His positive influence will never be forgotten. Papa wanted to be known for “being a fly fisherman” and he was. He will be greatly missed. Family graveside service will be held prior to the 2 pm memorial service on Monday, July 3, 2017, at the Assembly of God Church, 431 E Brown Ave., Moses Lake, WA.

Mervin A. Dexter, lovingly known as Papa, passed peacefully in his home, June 27, 2017. He was fortunate to live out his last years in the dream house he and his wife, Marilyn, built and enjoyed on Moses Lake. Mervin was born March 7, 1925,... View Obituary & Service Information

The family of Mervin A. Dexter created this Life Tributes page to make it easy to share your memories.

Mervin A. Dexter, lovingly known as Papa, passed peacefully in...