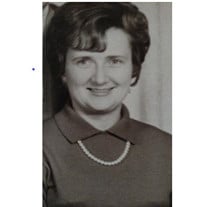 Melissa Kay O’Connell October 5, 1941 to March 3, 2021 Sadly, Melissa passed on March 3. She will be dearly missed. Melissa was born in Saint Paul Minnesota, and lived in Montana and Oregon for her childhood. She married Dave O’Connell June 11, 1959 and lived in Bakersfield California until 1966. They then moved to Othello Wa, where they owned a machine shop, for 8 years, with Dave’s brother and father. They then bought, and moved to a farm 5 miles south of Othello, and lived there until present time. Dave and Melissa have 3 sons, Don, Dennis and Dwayne, 3 grandsons, Sean, Jacob and Adam, and 1 great grandson, Carter. Melissa loved her work. She was a professional bookkeeper, and did that work for many businesses for over 30 years, such as for Para Feedlot, Lawrence Oil, Rasmussen Repair, Progene and O’Connell Machine Shop. She also drove the rock tractor while the family picked rocks. Melissa lived a full and varied life. As a kid, she loved swimming. She taught all her boys to swim at the Othello pool. She played softball during her 20s and 30s, was a fast runner, and played second base. She bowled on many teams over the years, although did not quite achieve a perfect game. She loved playing craps, slot machines, keno and family poker. She had several pets over the years, 2 dogs, lots of cats, and a peacock. They raised a pig who tasted delicious and lots of chickens giving farm fresh eggs for years. Melissa and Dave have done lots of traveling. They visited the pyramids in Egypt, rode a camel, visited the Oswan dam, Alexandria, Amsterdam and Anne Franks house. They traveled the US by car, plane and RV, seeing about half the states. Her favorite places were Vegas, the Grand Canyon and Bangor Maine. They visited Plymouth Rock and boarded the Mayflower. She liked watching the birds eat just outside of her kitchen window. Melissa and Dave had some dear friends, such as June and Hobart Roberts, Chris and Kurt Braunwart, and many others. She has 2 cousins, Larry and Karen Schute, the Oregonians.

Melissa Kay O&#8217;Connell October 5, 1941 to March 3, 2021 Sadly, Melissa passed on March 3. She will be dearly missed. Melissa was born in Saint Paul Minnesota, and lived in Montana and Oregon for her childhood. She married Dave O&#8217;Connell... View Obituary & Service Information

The family of Melissa Kay O'Connell created this Life Tributes page to make it easy to share your memories.