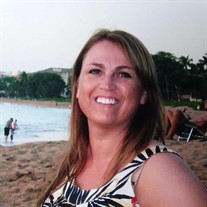 Melanie Miller was born to Adria and Roland DeLay on July 3, 1973. She was the youngest of seven siblings. In high school Melanie began dating her sweetheart Davey; even writing in a memory book that her goal was to marry Davey and have two children. Melanie and Davey were married on August 7, 1993; in those 28 years of marriage they had two children, Rylie and Lizzi. Melanie spent her days spending time with her family, camping, traveling, and collecting crystals. She often traveled to Hawaii, where she created many wonderful memories with her family. Wherever she was she was an excellent mother, a great wife, and a really good friend. Anyone who knew Melanie for more than 5 minutes would speak highly of her kindness and generosity. A story her niece, Kendra, often shares greatly exemplifies this. When Melanie was a teenager she took Kendra shopping and told her to pick something out. Melanie soon realized she only had enough money to either get what she wanted or to get what Kendra had picked out. Without giving it a second thought she put back her items and bought her niece’s pick instead. In 2012 Melanie was diagnosed with breast cancer. She began a long, hard fight with treatments that eventually worked and she was in remission for a few years. Unfortunately in 2018 her cancer came back and became more aggressive. Melanie spent the last few years fighting with a lot of determination and stubbornness and a great support system. On December 5, 2021 Melanie passed away, surrounded by her care team and loved ones. Her care team spent the last couple months by her side, making sure she knew how much she was loved and will continue to be loved. Team Melanie was made up of her nieces Kendra and Jenni; her sisters Debbie and Shannon; her children Lizzi and Rylie; her good friend Angie; her personal hospice nurse and nephew Justin; and her husband Davey. Melanie will be missed by her family by whom she is survived: her husband Davey; her children Rylie(McKenna) and Lizzi; her mother Adria; her siblings, Debbie(Tim), Ronnie(Tina), Shannon(Chris), Kim(JoAnn), Kelly(Kelly); her mother in law Ethel; her brother in law Dan(Ehrin) and her favorite nieces Kendra(Jonathan) and Jenni(Justin). Her memory will also be carried on by all of her nieces, nephews, and great nieces, as well as her friends and many community members. Melanie was welcomed in heaven by her father, Roland; brother Shane, sister-in-law Tina; her father in law Dave and nephew Justin. In lieu of flowers Melanie’s family asks that you please donate to Assured Hospice.

Melanie Miller was born to Adria and Roland DeLay on July 3, 1973. She was the youngest of seven siblings. In high school Melanie began dating her sweetheart Davey; even writing in a memory book that her goal was to marry Davey and have two... View Obituary & Service Information

The family of Melanie Miller created this Life Tributes page to make it easy to share your memories.

Melanie Miller was born to Adria and Roland DeLay on July 3,...