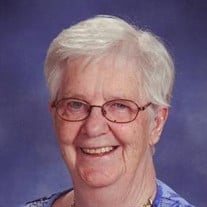 Mary Jane Morse died October 14, 2019 at Summerwood Care Center in Moses Lake, WA. Affectionately known to her family and friends as Teddy, she was born Jan 16, 1923 in St. Marie’s, ID to Peter and Zura Mungovan. She was raised in Spokane, WA and graduated from Marycliff High School. She married Robert E. Morse on October 10, 1944 and moved to Winthrop, WA to live and work on a sheep and cattle ranch. After moving to Spokane Bob worked for Acme Concrete Co. Teddy eventually completed her college degree in English at Whitworth College in 1964 and master’s degree in Education in 1969. She began her teaching career in Spokane at the Good Shepard Home for Girls. She later took an English teacher position at West Valley High School in Millwood, WA and taught there until her retirement. Bob and Teddy spent several years traveling the US in their travel trailer until Bob’s death in 1988. Afterwards Teddy lived in Wenatchee, WA helping care for Bob’s parents, Frank and Bertha Morse and Bob’s Aunt Lydia Rivers. She eventually moved to Moses Lake, WA to be closer to her daughter Mary and grandchildren. She lived independently and drove a car into her 90’s. However, the effects of Alzheimer’s forced her into extended care at Monroe House and then Summerwood Care Center. Teddy got her nickname because she was a true tomboy in her younger years. She always dreamed of living on a ranch and owning her own horse. She loved the ranch and would entertain family with stories of the challenges and mishaps of life on the ranch. She cooked for the hired men and bottle-nursed bum lambs in the house while raising small children. In addition to their five children, Teddy and Bob took in several foster children including two teenage Cuban refugee boys. Her children have many fond memories of family camp trips and summers at the cabin on Newman Lake in Rathdrum, ID. Teddy will be remembered with great love as a feisty, fun loving, story telling, adventuresome person. She loved Shakespeare, great literature, scriptural studies, and travel. Her intelligence, determination, and lively animated ways will live in our memories forever. Teddy was preceded in death by her husband of 42 years, Robert, sons Peter and Michael, her mother and father, brother Peter Mungovan and sister Irene Elmgren. She is survived by her daughters Mary Shannon of Moses Lake, WA and Rose Short of Everett, WA, son Robert David Morse of Spokane, WA, 10 grandchildren and 15 great grandchildren. A Rosary will be recited at 1:30 pm followed by a funeral Mass at 2:00 pm on Friday, October 18 at Our Lady of Fatima Catholic Church in Moses Lake, WA. Entombment will be on Saturday, October 19, 2:00 pm at Holy Cross Cemetery in Spokane, WA.

Mary Jane Morse died October 14, 2019 at Summerwood Care Center in Moses Lake, WA. Affectionately known to her family and friends as Teddy, she was born Jan 16, 1923 in St. Marie&#8217;s, ID to Peter and Zura Mungovan. She was raised in Spokane,... View Obituary & Service Information

The family of Mary Jane "Teddy" Morse created this Life Tributes page to make it easy to share your memories.