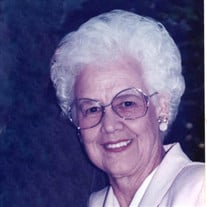 Mary Lou Cox, 88, went to be with the Lord November 5, 2016, at her granddaughters home in Moses Lake, Washington with her family by her side. Mary Lou was born February 17, 1928 to Oscar Carl Yorgesen and Marion Fairbanks Jacobsen in Shelley, Idaho. Mary Lou married the love of her life Dan M Cox October 23, 1946 in Darlington, Idaho. They were later sealed in the Cardston Alberta Temple May 23, 1973. They made their first home in Jameston, Idaho. They have had homes in Jameston and Darlington, Idaho. Prosser, Grandview and Warden, Washington. Mary Lou and Dan also wintered in Arizona throughout their Golden Years and fished their summers on Maine Island, B.C. After Dan’s passing Mary Lou moved to Othello, Washington. Mary Lou was a devout member of the Church of Jesus Christ of Latter Day Saints. She was a piano teacher to many throughout the Columbia Basin. Grandma Mary Lou’s home was always open to anyone and everyone. She welcomed them with a bowl of Candy and loved to entertain a good game of SkipBo. Family was everything to her. Mary Lou and Dan were blessed with five sons, 23 grandchildren and 72 great-grandchildren, each one loved dearly. Mary Lou is survived by her sons and daughter-in-laws, Danny and Shirley, Steve and Mary, Nelson and Connie, all of Warden and Jim and Alexa of Salome, Arizona; one sister Cora Gene (Cody)Anderson of Murray, Utah, also survives her. She was preceded in death by her parents, Oscar Carl and Marion Yorgesen, her husband Dan M Cox, a son O.C. (Oscar Carl), a grandson James Michael Cox, a great-grandson Coty LaDell Taylor and a great-granddaughter Shelby RuShelle Roden. Two brothers Russell and Frans Yorgesen and one sister Winona Maughan also precede her in death. Services will be on Friday, November 11, 2016 at the Othello Stake Center located at 1200 Rainier Street in Othello at 10 a.m. Interment to follow at Sunset Memorial Gardens in Warden. Visitation will be Thursday, Nov. 10th from 5pm to 7pm at Kayser’s Chapel of Memories in Moses Lake and 9am to 9:45am at the Stake Center preceding her services. Please sign the online guestbook or leave a note for the family at www.kayserschapel.com Arrangements are in care of Kayser's Chapel & Crematory. We would like to Thank all of those who cared for Mary Lou and assisted in her healthcare throughout her last few years. A special Thanks to her fellow Residents, the Administration and Staff of Coventry House and Avalon Care Center.

Mary Lou Cox, 88, went to be with the Lord November 5, 2016, at her granddaughters home in Moses Lake, Washington with her family by her side. Mary Lou was born February 17, 1928 to Oscar Carl Yorgesen and Marion Fairbanks Jacobsen in Shelley,... View Obituary & Service Information

The family of Mary Lou Cox created this Life Tributes page to make it easy to share your memories.