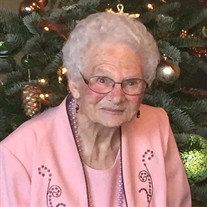 Mary Frances Elligsen Conrath age 98 died Tuesday January 2, 2018 in Moses Lake, Washington. Mary was born February 3, 1919 in Toronto Canada to Arthur Mockford and Frances Alford immigrants to Canada from England in 1913.In 1923 Mary moved with her parents and two older brothers to California, where they lived for 10 years. Mary had fond memories of her free-spirited childhood, growing up in Inglewood and Sacramento California. Her father worked in banking, served as a high school principal, and eventually was ordained into the Priesthood for the Episcopal Church. This is when she became a “preachers” daughter, and the idea did not always impress her! During these years her family worked hard and experienced the “Great Depression”, but to hear her stories of her adventurous childhood, times were great! Mary’s brother Roger was born in 1924, and sister Margaret in 1932. In 1933 when Mary was 14 years old, her father took a position as a priest at St. Paul’s Episcopal Church in Oregon City, Oregon. Mary was not happy about this move to the rainy climate of Oregon, and soon found herself enrolled in St. Helen’s Hall, an Episcopal School for girls in Portland Oregon. Her parents with their proper British roots, thought this would transform their active outdoorsy daughter into a “lady”. Mary was miserable, and eventually her parents allowed her to enroll in Oregon City High School, where she was much happier. Mary thrived, becoming actively involved in many school activities and sports. Tennis was her favorite, and she often talked about it, and frequently told people that her participation in Tennis was why she had such great legs! Mary graduated fromHigh School in 1936. During high school she met Frederick Melvin Elligsen, who she set her sights on, and eventually won his heart, and they married in 1940. They enjoyed fishing, hunting, skiing, and their love for the outdoors. Times were tough during World War II, Mary and Fred moved a lot, Fred working for the Oregon State Patrol patrolling and protecting the Oregon Coast line.Between 1940 and 1946 they lived and worked in Tumalo Oregon, Hood River Oregon, Garibaldi Oregon, Coquille, Oregon, and Burns Oregon. During this time, they had their first 3 children, Frederick Stuart (1943), and twin girls Sharon Rose and Karen Annette (1946). In 1947 the family moved to Bend Oregon, where Fred worked in Insurance. Another daughter was born in 1949 Julie Ann. In 1949 the family moved to John Day Oregon, where Fred took a job as Chief of Police. The family settled in to this little Eastern Oregon Community and made it their long-term home, raising their children and becoming active in the community. Mary was involved in the Rebecca Lodge, Lady Elk’s, St. Thomas Episcopal Church, and a Gun Club. They enjoyed camping, fishing, hunting, and spending time in the Eastern Oregon outdoors. Mary worked as a Nurses Aid and an Office Nurse, assisting in surgery from 1955-1968, enjoying her work in a medical career. In 1962 daughter Mary Laurie was born. Sadly, Fred passed away in 1963 from a heart attack, and Mary was left to finish raising the children.In 1968 Mary went back to school in Portland, Oregon to get training as a Medical Record Technician. She worked as a Medical Record Technician in John Day from 1969-1971. In 1971 Mary and daughter Laurie moved to Moses Lake, where Mary took a job as Medical Record Supervisor at Samaritan Hospital. Mary worked at Samaritan Hospital from 1971- 1984. In 1974 she married Henry “Jack” Conrath, and the two enjoyed participating in dance clubs like The Over the Hill Gang, and The Elks Club. They traveled often. Mary’s husband Jack passed away in 1996, again leaving her on her own. Being the strong woman, she was, Mary continued in good spirit enjoying heractive life. She moved to the Block-40 Community, enjoying country life. Mary was amember of St. Martin’s Episcopal Church, AARP, Women’s Club, Block 40 Gloydette’s, and did volunteer work for Hospice, the Senior Center, and Samaritan Hospital. Mary took up carving as a hobby and loved to garden and work in her yard. Mary loved animals, and always had favorite dogs and cats on her lap. Mary was the family matriarch, and loved to spend time with her children, grandchildren, and great grandchildren. She liked to look at them all with pride and state “Look what I started”! She not only started this family, she also supported it, loved it, inspired it, and will remain in our hearts always. Mary is preceded in death by her parents Julian and Frances Mockford, brothers Stuart, Martin, and Roger Mockford. Husbands, Frederick Melvin Elligsen and Henry “Jack” Conrath. Son Frederick Stuart Elligsen, and son in-law Max Morley. Mary is survived by one sister Margaret Foss (Calif.), daughters Sharon(Max) Morley, Karen (Ray) Dockery, Julie (Dennis) Reynolds, Laurie (Iver) Odegaard, Edith Smith (Fred), 15 grandchildren, and 19 great grandchildren. A Memorial Service Honoring Mary’s life will be held January 20th, 2018 at St. Martins Episcopal Church in Moses Lake, at 1 pm. Sign online guestbook at www.kayserschapel.com Arrangements in care of Kayser's Chapel. Memorials can be made in her name to: St. Martin’s Episcopal Church, Block-40 Scholarship Fund, or the Block-40 Gloydette Scholarship.

The family of Mary Conrath created this Life Tributes page to make it easy to share your memories.