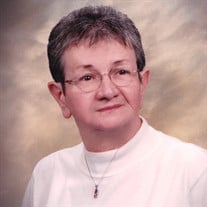 Obituary for Mary Ellen Breeden Mary Ellen Breeden, 82, longtime Moses Lake resident, passed away on Friday, May 4, 2018 at Central Washington Hospital in Wenatchee, her daughter at her side. Mary Ellen was born in Spokane, Washington on Christmas Eve, 1935. As a young girl, she lived with her parents, John and Zelma Prichard in Bremerton Washington when her family was building houses to support the war effort. After they moved to Moses Lake, Mary Ellen was involved with 4H, graduated from MLHS 1954 and attended WSU for 2 years. She met and married to Capt. Carl "Rusty" Breeden when he was stationed at Larson AFB. After they wed, they were stationed at Hill AFB in Ogden Utah, where Capt Breeden was part of the Airforce test pilot program. Sadly he died serving his country, and Mary Ellen and her daughter returned to Moses Lake in 1961. Throughout her life, Mary Ellen was extremely active in the Columbia Basin community. She loved to work with youth. She served as the Executive Director for Miss Moses Lake Pageant for 35 years. Along with ‘the committee’ of equally committed volunteers, it was a joyful experience to help the young women of Moses Lake to achieve personal growth, whether it was going on to Miss Washington and Miss America, or gaining the confidence to pursue career and personal goals, she took pride in being a part of their journey.She often found herself in the leadership position of organizations involving her daughter, including 4H, Girl Scouts and the youth group at the Moses Lake Presbyterian Church. She was involved with in Daughters of the Nile, Eastern Star and Amaranth. She also served for many years on the Grant County Fair Board. Mary Ellen was known for her culinary skills and she loved to entertain for and with friends. Mary Ellen worked many years in retail, including several at Seasons. When she retired, she was the kitchen manager for Michael's On The Lake. Survivors include her daughter and son-in-law, Carla and John Conrad; two grandsons, Eliott Conrad and CJ Conrad. She was preceded in death by her parents, John and Zelma Prichard and husband, Captain Carl "Rusty" Breeden. Her Celebration of Life service will be held at the Moses Lake Presbyterian Church at 1142 W. Ivy Avenue Moses Lake on Friday, June 1st at 12 noon. Lunch will be served after the service and everyone is invited to stay and enjoy. In lieu of flowers, consider sponsoring a youth to the MLPC summer camp or making a donation to a favorite local youth program. Please sign the online guestbook or leave a note for the family at www.kayserschapel.com Arrangements are in care of Kayser's Chapel & Crematory.

The family of Mary Ellen Breeden created this Life Tributes page to make it easy to share your memories.