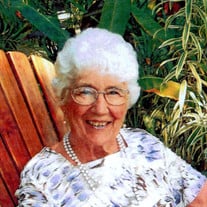 Mary E. Anderson died July 4, 2020 at 90 years old. Her family felt it was fitting that she died on the same day she was born, July 4th. She was born in 1930 on a farm in Leon, Iowa to her parents Murray and Helen (Fisher) Williamson. When Mary was young, her parents separated and later divorced. When her parents separated, Mary and her younger sister went to live with her grandparents - James and Nell Fisher in Osceola, Iowa. When Mary was a teenager, her father found a job as an airplane mechanic in Seattle. Mary, her sister, and brother moved across the nation with her father to live in Seattle. As the oldest, she became the caregiver for her younger siblings. She learned to shop, cook and clean and from this was borne a lifetime desire to care for others. During World War II, Mary got a job as an upholsterer for the Boeing Company. Through an acquaintance there, she met Patrick W. Anderson. She and Pat married on March 25, 1949 and settled into married life. In 1951, Pat, a Marine in the National Guard, was called back into the service during the Korean Conflict. At that time the couple resided in Santa Ana, California. After her brother, Max, drowned in an accident, Mary returned to Seattle to help care for her father. After the Korean Conflict was over, Pat moved back to Seattle and returned to his job at Western Electric and he and Mary began their family. Mary and Pat were dedicated to the service to others. As members of the Church of the Brethren, they worked to build the Covington Community Church of the Brethren in Covington, WA. Brick by brick, beam by bean, and person by person, the church grew. Mary also helped with the planning and building of Camp Koinonia, located in Cle Elum, WA. After their daughter, Marlene, was born, Mary and Pat made the decision to became foster parents and cared for many children over the years. In addition, they welcomed two sons, Max and Patrick. Mary and her husband moved the family to Maple Valley area where they could provide a safe and stable home for their growing family of nine children. While there, Mary also helped care for elderly shut-ins by shopping for their groceries, and transporting them to various appointments. She was instrumental in starting a local food bank and clothing cupboard and worked in a thrift store where the proceeds could support the food bank and clothing cupboard. In 1982, Mary was awarded the Jefferson Award by the Seattle Post Intelligencer for her service to others. Once the children were able to fend for themselves a bit, Mary took up art and developed a passion for painting, especially painting watercolors. Through the years she has won several awards for her artwork. Mary also worked with the Maple Valley Art Guild for years. She and her husband Pat were active stewards with the Lake Wilderness Preservation Association. Through their church they also were trained and participated with the Brethren Disaster Ministries, traveling to areas of the country hard hit by flooding, hurricanes, and more. They both had fond memories of the people they worked with and met in the course of this work. After her husband died, in 2010, Mary moved to Moses Lake to spend some quality time with her son Max, and his family. There, she got involved with the United Methodist Church of Moses Lake. She also spent Fridays at the Moses Lake Senior Center, enjoying lunch with a growing group of new friends. Proceeding her in death was her husband of 61 years, Patrick W. Anderson. Both her parents, her step-mother Ruth (Murray) Williamson, her brother, Max M. Williamson, her sister Jeanine Maffey, and her step-brother Murdock Williamson. She is survived by a step-brother Murray Ray (Tricia) Williamson in North Carolina, her children Marlene A. (Ron) Thomasson of Ocean Shores, Max M. (Luci) Anderson of Moses Lake, Patrick G. (Bridget) Anderson of Maple Valley, a foster son Nick (Beth) Holstrom of Wenatchee, eight grandchildren, 11 great grandchildren, with two more on the way. In lieu of flowers, remembrances can be made to: Brethren Disaster Ministries, P.O. Box 188, New Windsor, MD 21776-0188,or go online to: brethren.org/bdm. Internment: Tahoma National Cemetery, 18600 SE 240th St., Kent, WA

Mary E. Anderson died July 4, 2020 at 90 years old. Her family felt it was fitting that she died on the same day she was born, July 4th. She was born in 1930 on a farm in Leon, Iowa to her parents Murray and Helen (Fisher) Williamson. When... View Obituary & Service Information

The family of Mary E Anderson created this Life Tributes page to make it easy to share your memories.