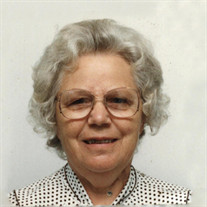 Martha Emma (Hemming) Goltz passed away August 01, 2018 at age 96. A funeral service will be held at 10:00 a.m. on Monday, August 6, 2018 at Kayser's Chapel of Memories followed by burial at Pioneer Memorial Gardens. Martha was born in Luneburg Germany December 27, 1921 into a large family. Her parents were Adam and Martha (Mielke) Hemming. During the German Depression Martha’s family moved to Poland with the promise of employment. But within days of arrival her family attempted to return to Germany but were denied because they no longer had passports. Their passports had been confiscated upon arrival. Martha was also denied a formal education during this period. Martha married Asaph Goltz in July 20, 1940. Asaph was also a displaced German as well. World War Two found Martha liberated but several years later she was fleeing from the Russian Communist Army with two sons, Willy and George. After WW2, Martha and family lived in Communist East Germany until 1948, whereupon the family did a covert night crossing of the patrolled border into West Germany. In this year the family applied for immigration to the USA as political refugees. Asaph was under the impression that every family in the USA owns their own home (wouldn’t that be nice). There was a three-year wait while background checks took place and paperwork processed. During this time two sons were born, Helmut and Theo. Immigration into the USA came by way of crossing the Atlantic Ocean in the troop ship “USNS General M.L. Hersey” in Nov 1951. This voyage saw Martha and family through New York Harbor and among the last to process immigration through Ellis Island. Great Uncle Ed Litke (who owned Ephrata Hi-U Motel) and R.P. Penhallurick shared the train fare from Vermont for the entire family. Asaph worked on the Penhallurick ranch. Hildegard was born during this time. In 1955 Asaph began his career in roofing and Martha started doing housekeeping at Maples Motel. She later worked as a cook at Crestview Nursing Home, as a cook at Saga Foods (BBCC), and as a cook at ML Golf and Country Club. In retirement Martha and Asaph wintered in Yuma AZ. Asaph predeceased Martha in 1996. Martha worshiped God in the Seventh-day Adventist Church christian faith. Martha is survived by four sons Willy (Janet) , George, Helmut (Azure), Theo (Marianne) and one daughter Hildegard and her spouse Joe Filebark. She is also survived by seven grand-children: Kari (Todd) Sumner, Kandi (Rod) Neal, Daniel Goltz MD, Cherilee Dunfield, Sherlynn Schlehuber, Joseph (Hillary) Schlehuber , and Benjamin (Heidi) Schlehuber. Great-grandchildren are Brooke and Haley Sumner; and Logan and Lane Neal; Lily and Eddie Dunfield, Crysla Schlehuber, Jakob and Zackary Schlehuber, and Ethan and Logan Schlehuber.

Martha Emma (Hemming) Goltz passed away August 01, 2018 at age 96. A funeral service will be held at 10:00 a.m. on Monday, August 6, 2018 at Kayser's Chapel of Memories followed by burial at Pioneer Memorial Gardens. Martha was born in Luneburg... View Obituary & Service Information

The family of Martha Goltz created this Life Tributes page to make it easy to share your memories.