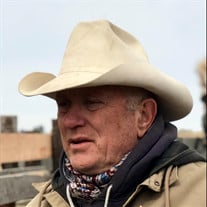 Marlo Duane Merrell passed away from complications during surgery in Orem, Utah on Aug 14, 2019. He was 69 years of age. Marlo was born in Ephrata, WA on Nov 8,1949 to Victor and Beatrice (Jensen) Merrell. He was the seventh of nine children. After graduating from Moses Lake High School in 1968, he attended Brigham Young University and then served a mission for the Church of Jesus Christ of Latter-day Saints in the California North Mission (Spanish speaking). He graduated from BYU with a degree in Sociology. After graduating from BYU, he met Carol Ann Cole and they married in the Washington D.C. temple. They spent their 43 years together raising their 5 daughters in Moses Lake, WA where he worked as an agricultural and commercial lending officer for several banks. Marlo retired in 2014 from Wheatland Bank as a Vice President but remained on the Board of Directors. He was an active member of the Moses Lake rotary. Marlo was an active member of the Church of Jesus Christ of Latter-day Saints where he served as a Bishop and in many other positions of service. He and his wife served an additional mission in the Washington Yakima Mission. Marlo loved people and never met a stranger! From his childhood days on the farm, he always loved livestock and all things agricultural, especially horses. After his retirement, Marlo enjoyed spending his time working a cattle ranch in Lind, traveling to see grandchildren, and making jam. He also enjoyed pack trips with buddies, keeping in touch with numerous friends, and concocting a variety of delicious foods. He was loved by all who met him, because of his wonderful sense of humor, friendly personality, and generous heart. He is survived by his wife Carol and children; Celeste (Darren) Parks, Tiffany (Todd) Davis, Amber (Sean) Jenks, Cherie (Andy) West, Candace Weller, as well as 18 grandchildren. Also siblings; Elaine Roylance, Max Merrell, Mary Merrell, Dixie Waldrip, Jeanie Bailey, and David Merrell. He was preceded in death by his parents, his brother Dallas Merrell, and his sister Vicki Sampson. A viewing will be held from 6 pm to 8 pm on Friday, Aug 23, 2019 at Kayser’s Chapel of Memories in Moses Lake, WA. The funeral will be held on Aug 24, 2019 at 10 am at The Church of Jesus Christ of Latter-day Saints, 1515 S Division St, Moses Lake, WA. His interment will follow at the Pioneer Memorial Gardens cemetery in Moses Lake. The family welcomes anyone wishing to pay their respects an hour prior to the service.

Marlo Duane Merrell passed away from complications during surgery in Orem, Utah on Aug 14, 2019. He was 69 years of age. Marlo was born in Ephrata, WA on Nov 8,1949 to Victor and Beatrice (Jensen) Merrell. He was the seventh of nine... View Obituary & Service Information

The family of Marlo Duane Merrell created this Life Tributes page to make it easy to share your memories.

Marlo Duane Merrell passed away from complications during surgery...