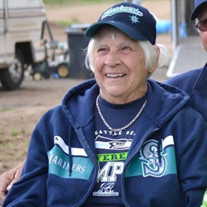 Marjorie Eva Scott On November 12, 2021, Marjorie was called home to rest. Marge was born to Lloyd and Regina Prouse on May 16, 1936. When Marge was 15, her parents and siblings moved by train to Bremerton, Washington. Marge met her husband, Scotty in 1962, while he was stationed at Sandpoint Naval Base in Seattle. The two married on April 25, 1964, and welcomed their daughter, Kim, three years later. In 1993, Scotty, Marge, Kim, and Kim’s son, Dakota, moved to Warden where Marge continued to live until her passing. During her time in Warden, she worked as a Juvenile Jailor in Ephrata until l she retired in 2001. Later, she worked as a substitute paraprofessional for the Warden School District until 2013. Marge loved her family more than anything. Her two grandsons and five great-grandchildren were her pride and joy. She would gladly talk to anyone who would listen about how incredible all her “kids” were. The children she cared for in the detention center as well as those in the school district were also her “kids.” She loved children and took care of anyone she came across as her own. Marge was also the most caring person to all. She was an excellent conversationalist who would talk to anyone about anything. She had a heart of gold and was genuinely interested in the lives of others. If someone was lucky enough to sit down and have a conversation with Marge, that person was never forgotten to her. She took the time to really listen to people, and it was something she was most known for. Football and baseball were two things Marge loved almost as much as her family and friends. She was an avid Seahawks and Mariners fan. Marge was active in her community as well. She was a 4-H leader from 1971 until she became the 4-H Superintendent a few years later. Marge continued with this role until she moved from Bremerton in1993. She was also a part of the Little Britches Club and taught at Rodeo School. Marge coached little league for many years and was inducted into the Kitsap Softball Hall of Fame for coaching in 1997. Marge was preceded in death by her husband, Scotty, her parents, Lloyd and Regina Prouse, and siblings, Bernard, Gladys, Doris, Frank, Bob, Joyce, and Ken. She is survived by her daughter, Kim (Don), grandsons Dakota (Renee) and Dahani, and great-grandchildren Aiken, Cael, Brylee, Daxton, and Dakota. Marge is also survived by her brother David, her sister Janet, and many nieces, nephews, as well as numerous great-nieces and nephews. A memorial reception will be held to honor the life of Marjorie Scott at the Community Church in Warden on Thursday, December 9, 2021, from 6:00 to 8:00 pm. All are welcome to join us in remembering this incredible woman. There will also be a memorial reception in Bremerton, but no date has been determined yet.

Marjorie Eva Scott On November 12, 2021, Marjorie was called home to rest. Marge was born to Lloyd and Regina Prouse on May 16, 1936. When Marge was 15, her parents and siblings moved by train to Bremerton, Washington. Marge met her husband,... View Obituary & Service Information

The family of Marjorie Eva Scott created this Life Tributes page to make it easy to share your memories.