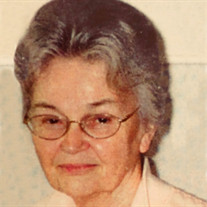 Marjorie was born on May 5, 1932 to Charles and Phyllis (Stokes) Harrett in Prince George, BC Canada. She passed away on Feb 24, 2018 in Moses Lake, Washington. Marj was the fourth of six children. When she was very young, her family moved to Pinche Lake, BC, which was 150 miles north of Prince George, where her father worked in the mercury smelter. She told of living in tents, with so many blankets to keep them warm that she would have to wake her sister Kay to hold them up so she could turn over. She and her siblings often fished in the lake for trout for their mother’s breakfast. She sang, and scared the fish. When she was about twelve, her father became too ill to work, and they moved to Fruitvale, BC. Her mother sold her piano for $500 and used the money to buy a gas station. Besides selling gas, the family, made pies, bakery goods and candies that the children and their father sold around town. In time, they sold the gas station and purchased a variety store. Marj worked in the store, cashiering and stocking to help her mother. Charlie passed away in the late 1950s; Phyllis continued to run the store until she retired in the 70’s and moved to Langley, BC. She passed away in 1986. Her first independent job was at a Singer Sewing center, where she gave sewing lessons. Sewing and baking skills learned when she was young stayed with her for her whole life; she sewed beautifully and made wedding cakes with white chocolate flowers that matched the bride’s bouquet. She met Robert Andresen, a handsome sailor, in 1954, and they were married in her family home. They lived in Whidbey Island while Bob finished serving, then relocated to his home town of Omak, Washington. She worked at Donaldson’s Five and Dime store, and helped to care for Bob’s parents, while Bob worked at a local lumber mill. Their daughter Jaye and son Jamie were born in Omak; Bob had to break through the Omak Stampede Parade to get her to the hospital for Jamie’s birth. Timing is everything. Their son Jeffrey was born in Redmond, Washington, where they moved when Bob got a job with the Bellevue Water Department. The family moved into the Lake Hills area of Bellevue, where Marj worked part time at the Crossroads Fred Meyer store. In 1967, Marjorie rejoined the church of her childhood, professing her love of God. Daughter Jennifer was born in 1973. Marj started catering, working her way up to Banquet Manager of the Seattle Hilton. She did banquets and catering for Paccar in Bellevue. She worked in the Doctor’s dining room at Virginia Mason Hospital in Seattle. A natural artist, Marj taught herself to paint; china, pictures and murals. She painted on the walls of Jaye’s restaurant, Jeff’s YMCA gymnasiums and Jen’s Spa in Montana, and in several homes. She suffered a major head injury in Wyoming in 1988, when she fell from the back of a pickup truck while running the kitchen of a YMCA camp. It took a while, but she healed and went on to lead a full life. Bob became ill in 1984, and Marj cared for him until his death in 2001. She moved them to Sedro-Woolley in 1999. She enjoyed spending time with her children and grandchildren, and the friends and workers from her church. She loved to travel with her sister Kay and brother David, driving her motorhome to Texas and the Central parts of Canada to visit family and attend church conventions until she was into her eighties. Marj was preceded in death by her husband, Robert Andresen, her parents Charles and Phyllis Harrett, her brothers Raymond, Donald and Peter, her sister Kathleen Dodd, nephew Mark Dodd and sister-in-law Valerie Harrett. She is survived by her daughter Jayeleen and Frank Newberg and son James and Meg Andresen, all of Moses Lake; son Jeff and Tammy Andresen of Georgetown, Texas; daughter Jennifer and Jon Krack from Columbia Falls, Montana; her grandchildren: Tyler and Irina Newberg, Kyle Newberg and Hailee Job; Kolbi, Taylor, Bailee and Treyton Andresen; Bowdrie, Carson, Cassidy and Chantry Krack; her brother David Harrett, brother-in-law Ken Andresen and Je’; many nieces and nephews and her brothers and sisters in the church. Viewing will be at Kayser’s Funeral Home in Moses Lake, WA on Saturday, March 3, 2018 at 9:00 a.m., services will begin at 10:00 a.m. She will be interred at Tahoma National Cemetery, with her husband.

Marjorie was born on May 5, 1932 to Charles and Phyllis (Stokes) Harrett in Prince George, BC Canada. She passed away on Feb 24, 2018 in Moses Lake, Washington. Marj was the fourth of six children. When she was very young, her family moved to... View Obituary & Service Information

The family of Marjorie Andresen created this Life Tributes page to make it easy to share your memories.