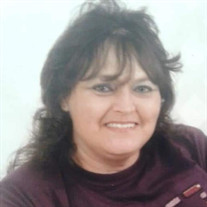 Marion “Tink” Marie Buck-Campbell, age 72, passed peacefully with her daughter and canine companion by her side, at Avamere Assisted Living Facility in Moses Lake, her home of 8 years. Marion fought hard with a 20-year battle of sarcoidosis of the lungs which ultimately took her life. Marion was born in Condon, Oregon to Horace 'Bud' and Marion Buck. She spent most of her childhood with her grandparents, the Tuttle’s of St. Maries, Idaho and the Buck’s of Pasco, Washington. Marion had one brother, Samuel Buck, and a half brother who was adopted at the age of 5, by the name of Christopher, whom, unfortunately, she was unable to meet before her death. Marion was a long-time resident of Moses Lake, where she lived the remainder of her days. She also worked for Simplot of Moses Lake for a number of years, where she eventually had to retire due to her illness. Marion loved life and was full of jokes. To many, she was known as ‘Granny’. She loved cowboys, firefighters and really any man with a nice “tushie-tushie,” as she would say. She was caring and nurturing, so it makes sense that her children, grandchildren and great-grandchildren were her greatest loves. Her other great love was her Chiweenie, Sadie Marie, whom Marion adopted, spoiled and loved dearly for the last 13 years. Unafraid to tell it like it was, Marion had a sense of humor and a smile that could light up any room and maybe even turn a few faces flush, no matter how appropriate or inappropriate her comments may have been. In her, you found a friend, an easy ear to listen and someone who let life take her for a ride and didn’t sweat the small things. Granny’s love, laughter and personality, is sure to be missed by all that knew her. She is preceded in death by her father and her mother as well as her brother Samuel and her grandchildren Michael Antonio Gonzalez and Ronnie Allen Gray Junior. Marion is survived by her children; Tracy (Johnny) Gonzalez, Thomas Campbell, Timothy (Ruby) Campbell and Angela (Luciano) Hernandez and also by her 19 grandchildren, 27 great-grandchildren and her beloved Sadie Marie. Marion’s wishes were that there would not be a service but rather a big party in her honor with drinks, barbecue and the sharing of her memory by her family and friends. This is scheduled for her birthday in August and everyone who loved her is invited to celebrate her life. If you would like to donate to a cause in her honor, please visit; stopsarcoidosis.org.

Marion &#8220;Tink&#8221; Marie Buck-Campbell, age 72, passed peacefully with her daughter and canine companion by her side, at Avamere Assisted Living Facility in Moses Lake, her home of 8 years. Marion fought hard with a 20-year battle of... View Obituary & Service Information

The family of Marion Marie Campbell created this Life Tributes page to make it easy to share your memories.