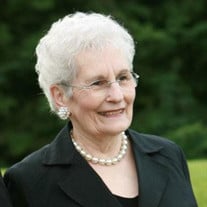 Marilyn Kay Jennings, 85, a 40-year resident of Moses Lake, was welcomed home by her Savior on June 15, 2018, with her family by her side as she passed peacefully. Marilyn was born the oldest of five children on September 15, 1932 to Charles and Tina Anderson in Aberdeen, South Dakota. She lived there until her middle school years when the family moved to Mill Valley, California for a year and shortly after settled in Salem, Oregon where she graduated from high school. She often spoke of her time spent with her dad helping run the family grocery store, Anderson Market, and returning to her Gram’s farm in North Dakota during the summers. Following high school she attended Oregon State University where she earned her Bachelor's Degree in Education and met the love of her life, Glenn Jennings. Glenn and Marilyn were married on June 11, 1955 and made their first home in Oregon followed by a short time in Boise before settling in Seattle in 1965. They then moved to Moses Lake in 1977. Marilyn enjoyed teaching elementary school for a few years before she and Glenn began their family. She spent the majority of her adult life raising their five children and was active in their schools as a PTA member, volunteer librarian and was engaged with their many activities. Marilyn and Glenn were also active members of the First Presbyterian Church in Moses Lake for many years. Following Glenn’s death, Marilyn joined the Christian Missionary Alliance Church. Marilyn was a lifelong learner, avid reader and was actively engaged in Bible studies until the time of her death. She also enjoyed many travels including to the Holy Lands where she was baptized in the Jordan River. Marilyn was preceded in death by her husband Glenn, who passed in 1992, as well as her parents and two of her sisters, Sharon Hofstedt and Marsha Snow. She is survived by brother Rod Anderson, sister Ginny Palmer, and five children: Mike Jennings and his wife Virginia, Mark Jennings, Matt Jennings and his wife Dayna, Brad Jennings, Sue Brennan and her husband Phil. She leaves a legacy of 11 adoring grandchildren, Michelle Peadon and her husband Jorgan, Jerad Jennings and his wife Lisa, Chris Jennings, Kymber Beers and her husband Dan, Brittni Perkins and her husband Johnny, Melissa Dyksterhouse and her husband Shandon, Madison Jennings, Zach Jennings and his wife Abby, Emma Brennan, Liam Brennan and Avery Brennan. Her crowning glory was her 13 lovely great grandchildren with two more on the way. Her family would like to thank her community for the love and support of their mom through the years, especially the last few months. A memorial service honoring Marilyn’s life will be held at Moses Lake Christian Church, 200 E. Yonezawa Blvd. on Saturday, June 23, at 11:00 a.m. and will be officiated by John Roberts.

Marilyn Kay Jennings, 85, a 40-year resident of Moses Lake, was welcomed home by her Savior on June 15, 2018, with her family by her side as she passed peacefully. Marilyn was born the oldest of five children on September 15, 1932 to Charles... View Obituary & Service Information

The family of Marilyn Jennings created this Life Tributes page to make it easy to share your memories.