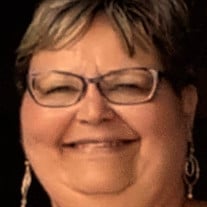 Marie H. Jones, Born September 11th, 1959. Marie passed away on August 23rd 2020. Place of birth Moses Lake, Washington. Parents are James Jardine of PowderHorn, Colorado and Marsha M Coffin of Wenatchee, Washington. In 1962 Marie was run over by the train ride at the fairgrounds, if she had been 6-months older or 6-months larger, she would not have made it. She is the reason the train ride doesn’t encompass all of the rides at the fair anymore. Marie attended the Moses lake Lakeview, Longview, Chief Moses, and the Moses lake high schools. She was actively involved in 4-H. She was the President, Secretary, treasurer and reporter. In high school Marie was involved in FFA. She raised sheep; she rode horses from the time she could walk. Horses were her favorite animal. Marie graduated high school in 1978. Marie went to Kinmen business University to take a 12-month course and finished in 10 months, during this time Marie was rodeo queen for the Moses Lake rodeo. Marie was a Revenue Agent with the department of Labor and Industries for 40 years. She was part of the Moses Lake Youth Baseball Association, she was the treasurer, secretary, and jack of all trades. She has been part of the board for 25 years. She did the lap counting and time trials for the Moses Lake Demo Derby for 30+ years. Marie also assisted the 4-H dog superintendent for 20 years here in Moses Lake. In 2011 Marie lost her left leg due to a blood clot and a severe infection. She always said “she would get back to as much of a normal life as possible”, which she did. She Married William R Jones on September 24th,1988 in Coeur d’ Alene, Idaho. They had two children, Caitlyn and Kody. She divorced William in May of 1998.She passed away peacefully, surrounded by her loving family. Marie was a wonderful mother, grandma, and friend. We are all going to miss her laughter and sense of humor. She is survived by daughter Caitlyn L Wyatt, Son Kody E Jones. Grandchildren are Dakota E Wyatt, and Elora A Wyatt. Siblings sister Viki L Jardine. She is pre-deceased by her brother Lee J. Jardine and both her parents. A memorial will be scheduled at a later date.

The family of Marie H Jones created this Life Tributes page to make it easy to share your memories.