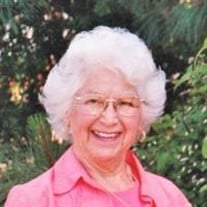 Maria Olga Hickman was born in Santa Rita, New Mexico on October 26, 1926, to Ambrosio and Francisca Rodriguez. She is survived by her brother Ralph and sisters Helen and Martha. Olga, as she was known, was preceded in death by her beloved husband... View Obituary & Service Information

The family of Maria Olga Hickman created this Life Tributes page to make it easy to share your memories.