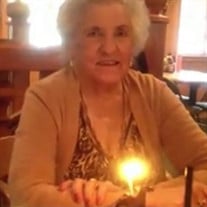 On December 24, 2020, Margarete (Marie) Hunter passed away peacefully at her home with her children by her side. Margarete was born January 14, 1937 in Treubaub, Czechoslovakia to Josef and Hildeguard Dirr. She was the youngest of 5 children. She is a survivor of WW2 and was part of one of the largest ethnic-cleansing campaigns in the history of the world with the expulsion of the Sudetenland Germans from their historic lands in Europe. Her family was relocated to Wertheim, Germany where she met and married a U.S. Army soldier, Gordon Hunter. In 1956, she followed her husband, Gordon, to the United States and proudly supported him as a military wife. She made many sacrifices until his retirement in 1971. She became a United States citizen on September 18, 1959. They made Moses Lake their home in 1969, where they raised their 7 children. She retired from Simplot after 28 years of dedication. After retirement, she enjoyed many hours with her grandchildren and working in the yard growing beautiful flowers. She had a great love for animals and often took in strays or any other animal that someone could not care for. She was one of the funniest woman that people encountered and made everyone laugh. Her health began failing quickly after the death of her oldest son, Tom, and it’s believed she died of a broken heart. Margarete is proceeded in death by her husband, Gordon, infant son, Michael, Tom, Her parents, Josef and Hildeguard Dirr, Brothers Eric and Walter, and her sister, Edith Feldman. She is survived by her children, Rick Hunter, Roy (Ginger) Hunter, Bill (Renee) Hunter, Bob (Kathy) Hunter, Patricia (Adolf) Vasquez, Tanya (Chris) Kanoff, 17 grandchildren, 27 great grandchildren, 1 great great grand child, and her sister in Wertheim, Germany Margit Schelhaas. There will be a Gravesites Service on January 14, 2021 at 11:00 a.m. at Pioneer Memorial Gardens. In lieu of flowers, please make a donation in Marie’s name to Grant County Animal Outreach or Daze of Camelot Animal Sanctuary.

On December 24, 2020, Margarete (Marie) Hunter passed away peacefully at her home with her children by her side. Margarete was born January 14, 1937 in Treubaub, Czechoslovakia to Josef and Hildeguard Dirr. She was the youngest of 5 children.... View Obituary & Service Information

The family of Margarete Hunter created this Life Tributes page to make it easy to share your memories.