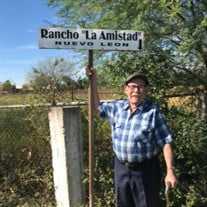 Marcelo Vela Pruneda, 90, longtime Warden resident, passed away Monday, September 21, 2020 at Kadlec Regional Hospital in Richland, WA. Marcelo Vela Pruneda was born on January 16, 1930 in Los Ramones, Nuevo Leon, Mexico to Juan & Evarista Pruneda. He married the love of his life Cecilia Alaniz on August 17, 1952 in Matamoros, Tamaulipas, Mexico. He worked a variety of agricultural jobs in many different states before settling down with his wife and children in Warden, WA. Marcelo was a very caring, loving husband, father and grandfather. He enjoyed spending time with his children at his rancho “La Amistad” in Nuevo Leon. He was known for always having peppermint candy, chocolate and lollipops in his pocket and would always share them with his grandchildren and great grandchildren. We will always cherish the memories we had with him, especially the yearly tradition of passing candies out on Halloween night to his grandchildren and neighbors. Marcelo is survived by his children and their spouses who all reside in Warden; Juana Elvia and Gilberto Martinez, Marcelo Jr and Dionesia Pruneda, Tomas and Maria Lucinda Pruneda, Evarista and Agapito Gonzalez, & Jesus and Irene Pruneda. Marcelo is also survived by his 17 grandchildren, 33 great-grandchildren, & two great-great grandchildren. He was preceded in death by his wife Cecilia Alaniz Pruneda, his parents Juan & Evarista Pruneda, brother Juan Vela Pruneda, and two sisters Adeliada Pruneda de Martinez and Dominga Pruneda de Alaniz. Marcelo will be missed immensely by his family and all of those who knew him. Arrangements are in care of Kayser’s Chapel & Crematory, Moses Lake. Viewing will take place at the home of Agapito & Evarista Gonzalez on Thursday, September 24, 2020 from 4 p.m. to 7 p.m. Mass will take place at Queen of all Saints Catholic Church at 9 a.m. followed by burial at Sunset Memorial Garden in Warden, WA.

The family of Marcelo Vela Pruneda created this Life Tributes page to make it easy to share your memories.