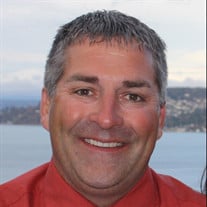 Marc Peter Janett, 49, of Royal City, passed away on October 3, 2019. He was born to Harold and Judy Janett in 1970, in Ellensburg, WA. Marc graduated from Royal City High School in 1988 and attended Washington State University. Marc worked in the agriculture industry on the Royal Slope his entire life and was the owner of MJ Farms. Family came first for Marc, and his family was his top priority. He was loved by everyone and continually lifted up those around him. Marc lived life at full throttle and enjoyed motorcycle racing, snowmobiling, snow skiing, hunting and helping his friends. He was a member of the New Life Fellowship, served on the Royal FFA Advisory Board and supported FFA and 4-H for many years. Marc received the Grant County Hay King award in 2010, 2013, and 2015. Marc is survived by his wife Darcie and his five children: Cody, Allie, Chase, Tucker, and Gannon Janett, his mother Judy Janett Davis, brother Craig (Kerry) Janett and his sister Anne (Todd) Filer. As well as his nieces and nephews: Jenni Kenyon, Cindy Scroggins, Jake Janett, Kaylee Janett, and Jeffrey Filer. Marc is proceeded in death by his father Harold Janett. The memorial service will be held on Saturday, October 12 at 11 a.m. at the Royal Intermediate School with lunch to follow at the New Life Fellowship. In lieu of flowers the family requests that you donate to the; Royal FFA chapter: P.O. Box 486 Royal City, WA 99357 or Youth Outdoors Unlimited: 528 W Broadway Ave Moses Lake, WA 98837 Memo – Marc Janett Memorial

The family of Marc Peter Janett created this Life Tributes page to make it easy to share your memories.

Marc Peter Janett, 49, of Royal City, passed away on October...