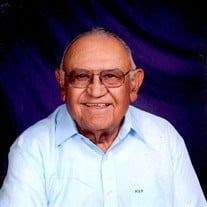 Manuel Ponce Garcia, 90, a long time resident of Moses Lake, Washington, went to be with the Lord after a long happy life surrounded by his wife Margarita at their home. Family from throughout Washington State were able to come visit him within the past few months. Manuel was born on February 10, 1930 in Rancho La Luz, Coahuila, Mexico to Florencio and Rosa Garcia Ponce. He was the third of seven children. Manuel was raised in Mexico and settled in California when he was around 22 years old. He met his wife, Margarita, in California and they were married in Visalia, California in 1964. Two children, Manuel (d. 1965) and Rose were born in California. In 1968, the family moved to Moses Lake, Washington where they became members of Our Lady of Fatima Catholic Church. In 1969, Manuel Jr. was born to complete the family. Later he opened his home and served as a father figure to several nieces and nephews - Armando, Veronica, Gabriela, Santos, and Enrique. Manuel worked in the Moses Lake area until his retirement from Carnation Company in 1992. He enjoyed a long retirement and kept busy developing his ranch where he raised various animals. At home he loved gardening and landscaping their yard with beautiful flowers and trees. He was always dedicated to his family and enjoyed visiting with family and friends. He loved taking his family on Summer vacation trips to Texas, California, and Mexico. In his retirement years, he especially enjoyed riding the train with his wife Margarita to visit his sister Elena in Visalia, California. Manuel was a loving husband, father, uncle, grandfather, and great-grandfather. His kindness, smile, and laughter will be missed by all. He is survived by: his loving wife Margarita, his daughter Rose and her husband John of Richland, Washington, his son Manuel Jr. and his wife Yvonne of Moses Lake. Grandchildren: Jessica, Manuel III, Monica, Elizabeth, Johnny, and Nicholas. Great-grandchildren: Cambria, Summer, Elijah, Maverick, and Zachary. Manuel’s family wants to thank Samaritan Hospital and Assured Hospice for the great care he received from them. Thank you for the prayers from family and friends near and far, church friends at Our Lady of Fatima Catholic Church in Moses Lake and the Missionary Daughters of the Most Pure Virgin Mary in Vineland, New Jersey. Rosary/Vigil: Thursday, January 7, 2021 at Kayser's Chapel, Moses Lake, Washington Funeral Mass: Thursday, January 7, 2021 at Our Lady of Fatima Catholic Church, Moses Lake, Washington

Manuel Ponce Garcia, 90, a long time resident of Moses Lake, Washington, went to be with the Lord after a long happy life surrounded by his wife Margarita at their home. Family from throughout Washington State were able to come visit him within... View Obituary & Service Information

The family of Manuel Ponce Garcia created this Life Tributes page to make it easy to share your memories.