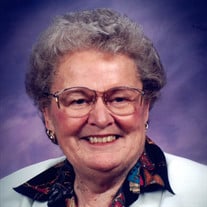 Mable Francis (Talbert) Chandler left her earthly home and passed into the arms of her loving Savior on January 1st, 2022. She was born January 11th, 1928 to Patty Saphrona and Willie Bob Talbert in Princeton, Arkansas. Her father was killed in an accident when she was 16 and her mother remarried. Hers was a humble life in a rural upbringing. She fell in love with a schoolmate Glyn Chandler who called her affectionately “half-pint” for her tiny stature. Glyn went to Europe in WWII, survived and came back to marry her June 20th 1946 and they promptly left Arkansas behind for Washington State with stops in Colorado and California but could not find work there. They gained employment at an orchard in Wenatchee, Washington eventually obtaining a small home and Cherry orchard of their own. All five of her children were born there before moving to Moses Lake Washington in 1958 where Glyn had bought a Ford Tractor Dealership. Fran continued living in Moses Lake until she went home to be with the Lord. While raising her children, Fran was involved in the running of the office in the business for most of their time in the tractor and implement industry. The Chandlers also acquired land, planted orchards, and subdivided the land as additional enterprises. Fran was involved in it all. Later when Glyn sought political office, she was there at his side – especially the last 11 years as a state legislator in Olympia, Glyn passed away from cancer in 1990. Fran then volunteered her time for many years with Moses Lake Christian School forming a Memorial Library there in Glyn’s name. Several of her family worked there and many grandchildren attended. In later years her hobbies and pastimes included gardening, reading, scrapbooking, and spending time with family. Fran leaves behind her daughter-in-law Jeni Chandler (Bob) of Texas, son Gary Chandler (Debbie) of WA, daughter Debra Ann Lambert (Corky) of OR, son Gregg Chandler (Lisa) of OR, son David Chandler (Laury) of WA and a multitude of 18 grandchildren, 39 great-grandchildren, and many nieces and nephews and their children. Fran was preceded in death by her parents: Willie Bob and Patty Talbert, sisters: Lucille Looney, and Juanita Riggans, brother: David Talbert, her oldest son Bob, her grandson: Jeremy, her great Grandson: Ezekiel and the love of her life, her best friend and husband, Glyn. The Family owes a debt of gratitude to the loving care Fran received from the Staff and Administration at every level at first at assisted living at Brookdale, and then at Summerwood Alzheimer’s Special Care Center. Thank you all. Also to Assured Hospice of Moses Lake staff we are grateful for your kind service to her as well. In lieu of flowers, memorial gifts may be made to Assured Hospice of Moses Lake. Hers was a good life, with treasured family and many friends and a loving God who was her shepherd. We all miss her. A Celebration of Life will be planned for later in the year.

Mable Francis (Talbert) Chandler left her earthly home and passed into the arms of her loving Savior on January 1st, 2022. She was born January 11th, 1928 to Patty Saphrona and Willie Bob Talbert in Princeton, Arkansas. Her father was killed... View Obituary & Service Information

The family of Mable Francis Chandler created this Life Tributes page to make it easy to share your memories.