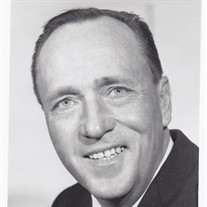 M. L. “Bus” Bertram, 92, of Moses Lake, Washington passed away peacefully in his home on June 12, 2019. Bus was born in Picabo, Idaho on November 27, 1926 to John & Laura Bertram, and was the youngest of five children. He grew up in Boise, Idaho and attended Boise High where he excelled at football, earning all-state honors, before graduating in 1945. After graduation, Bus enlisted in the U.S. Army Air Corps during World War II and became a B-26 tail gunner with the 101st Airborne Division in Europe. His unit helped liberate prisoners from the Dachau concentration camp in Germany at the end of the war. Bus was called back into service with the U.S. Air Force when the Korean War began in 1950 & served as a Master Sergeant. In serving his country during these two conflicts, Bus became part of a now dwindling group of veterans known as “America’s Greatest Generation”. Between wars, Bus was recruited to join the U.S. Forest Service as a smokejumper in McCall, Idaho. For two fire seasons, Bus jumped on forest fires in the remote parts of Idaho – beginning a life-long passion for skydiving. After Korea, Bus joined a friend in a concrete/sand & gravel business in La Grande, Oregon. This was where he met the love of his life, Marilyn Evans – a high school teacher. On June 25, 1955, Bus & Marilyn married and moved to Moses Lake where Bus began AAA Readymix in 1956. For the next 20 years, Bus and “AAA” helped build the Basin. During this time: Bus also earned his private pilot’s license, owned a couple of Cessna airplanes, wrapped up a skydiving career with over 1200 jumps (3 malfunctions) and served on the board of the United States Parachute Association. In 1980, a restless Bus, began another successful business - Two-Rivers Sand & Gravel - in Lake Wenatchee, WA; commuting by airplane for the next several years. Finally, after 40 years of pouring mud, Bus retired. Bus was a life-long member of the Elks Club & Columbia Basin Rodeo Association. He was also an active civic leader - contributing countless hours of construction expertise & materials to a wide-array of community projects. Bus was a devoted husband & father who adored his grandchildren! He and Marilyn traveled extensively and cherished their trips to Hawaii with friends & family. Bus is survived by his loving wife of 63 years, Marilyn; his children, Cindy Amos, Sallie Lester (Ron), Bruce Bertram (Kathy), and Bill Bertram (Joan); his grandchildren Scott (Jessica), Becky (Doug), Brady, Sarah, Blake & Christopher; and his great grandchildren Nolan, Josie, & Henry. Bus is preceded in death by his father John, mother Laura, and siblings - John, Bertha, Thelma, and Lucille. A funeral service is scheduled for 11:00 a.m. - Friday, July 12 at the Immanuel Lutheran Church located at 1020 South A Street in Moses Lake. In lieu of flowers, donations are encouraged to be made to the: Washington Elks Therapy Program for Children.

The family of M. L. "Bus" Bertram created this Life Tributes page to make it easy to share your memories.