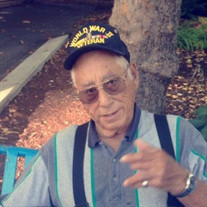 Lupe T. Alamos went to be our Our Lord, Monday, January 2, 2017. He passed away at his home. Holy Rosary will be prayed at 10 a.m. Friday, January 13th at Our Lady of Fatima followed by Mass of Christian Burial at 11 a.m. Military Honors will be held during the committal at the church columbarium. A reception will follow in the Fatima Center. Please sign the online guestbook or leave a note for the family at www.kayserschapel.com Arrangements are in care of Kayser's Chapel & Crematory. Lupe was born on December 24, 1925 in Casper, Wyoming to Manuel and Frances Alamos. He was one of six children. Lupe moved to Washington State in May of 1944 and joined the Army in October of 1944, being honorably discharged in 1947 as a Private First Class. Lupe was a World War II veteran and during his two year active duty in Germany was wounded and was honored with a purple heart. Lupe met and married his wife, Nora, in 1945 and they were married for 66 years when Nora passed away in 2011. After his military service, Lupe knew he had to find work to provide for his young family and decided to make the move to Moses Lake. He moved here in 1952, not knowing what work he would do. After his move here, he knew he that Moses Lake was where he would live and raise his family. Lupe and Nora raised seven children here: Vicki, Linda, Lupe, Tom, Peggy, Tammy and Rolando. He was not afraid to work and was loyal to those he worked for. Lupe became very knowledgeable in the potato harvesting industry. His hard work and knowledge gave him the opportunity to advance into management. Lupe never knew a stranger, he made many friends during his lifetime. He was always willing to help others. Lupe will be greatly missed by his family and friends. Survivors include his children, Vicki, Lupe, Tom, Tammy and Rolando; 18 grandchildren; 24 great-grandchildren; 9 great-great grandchildren. Besides his parents, he was preceded in death by his wife, Nora, 2 daughters, Linda and Peggy, great-grandchild, Elijah and 4 siblings.

Lupe T. Alamos went to be our Our Lord, Monday, January 2, 2017. He passed away at his home. Holy Rosary will be prayed at 10 a.m. Friday, January 13th at Our Lady of Fatima followed by Mass of Christian Burial at 11 a.m. Military Honors will... View Obituary & Service Information

The family of Lupe T. Alamos created this Life Tributes page to make it easy to share your memories.