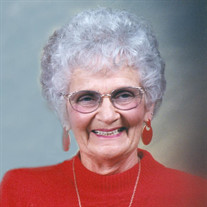 Lulabelle (Robb) Kougl, 87, Moses Lake resident, passed away Friday, February 24, 2017. A Memorial Service will be celebrated at 2:00 PM Thursday, March 2, 2017 at the Moses Lake Presbyterian Church, 1142 Ivy street, with Pastor Eric Frey officiating. Refreshments and a time of fellowship will follow at the church. Lulabelle was born September 6, 1929 in Eaton, Colorado to Pete and Mae Wilson. While in high school, she was honored with the titles of Homecoming Queen and Salutatorian. Lu moved to Moses Lake, WA in 1952 with her Husband Jim Robb, when he won 40 acres of land in a G.I. drawing. Their property was on Stratford Road in the Block 40 community. It was there that they built their first home, 680 square feet. They started up a dairy farm, then got range cattle and later acquired another ranch. They made many friends and were active in the Block 40 community and 4H activities. Lu was a devoted Christian in work with our Lord, helping to build the Christian Missionary Alliance Church in Moses Lake. Lulabelle enjoyed playing softball on the Moses Lake team called "The Farmers Daughters". She also became an avid bowler in her later years and never missed her weekly bowling with her team. She is survived by 2 brothers Duane Wilson & David Wilson, her three children Bruce Robb, Jan (Robb) Hall (Larry) and Scott Robb (Carole). Lu has been blessed with 7 grandchildren, Torey (Thad), Jason (Audy) Cody(Kristine), Jesse(J.J.), Alex, Luke, and Adam. And 7 great-grandchildren, Siarra, Braxton, Gabriella, Isabella, Keilana, Kennedy, Jeter. We will miss you LULABELLE, our Mother, Grandmother, Great Grandmother and Sister.

The family of Lulabelle Kougl created this Life Tributes page to make it easy to share your memories.