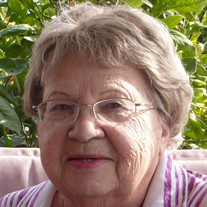 Lugene (Jeanie) Shoman, 88 passed away peacefully January 14, 2020 surrounded by family at the Enumclaw Health & Rehab Center, Enumclaw, WA. Burial was January 21, 2020 at Guarding Angels Cemetery, Moses Lake, WA. Jeanie was born February 6, 1931 in Wilton, North Dakota to Fred and Josephine Brezden. She graduated from Wilton High where she met her high school sweetheart, Nick Shoman. They were married August 19, 1950 and shortly thereafter moved to Washington State where Nick was stationed in the US army Fort Lewis, WA. After being discharged from the military, Nick and Jeanie moved to many states for his work. They finally settled back in Washington and purchased their first home in the Renton Highlands where they raised their three daughters. Jeanie loved her family, baking cookies, playing cards and board games, going to garage sales, camping, fishing, doing crafts, dancing, and volunteering. She was a Girl Scout leader, Avon distributor, member of the Renton Elks, choir member at St. Anthony’s Catholic Church and she helped in running the “Friendly Kitchen” serving many meals to the hungry. Once Nick retired, they became “Snowbirds” and spent winters in Yuma, AZ. They both loved the warm weather, golfing together, swimming, hosting block parties and visiting Mexico. Jeanie is preceded in death by her husband Nick and survived by her daughters, Linda Miles (Bill), Joann Welch (Curt) and Denise Roe (Ed); her grandchildren, Christy Welch, Corine Cooper, Sean Roe, Brianne Miles and Kevin Roe; great grandchildren, Jaymee Welch, Joseph Cooper and Gabriel Roe, along with their families; her sister, Marge Backman (Raymond), and many nieces and nephews. The family would like to give a heartfelt thank you to all the caregivers and staff at the Enumclaw Center for their care, respect, and dignity they gave to our mother, Lugene. In Lieu of a “Celebration of Life” that was to be held June 6, 2020 the family asks that you share your memories or sign the guestbook online at www.kayerschapel.com.

The family of Lugene "Jeanie" Shoman created this Life Tributes page to make it easy to share your memories.