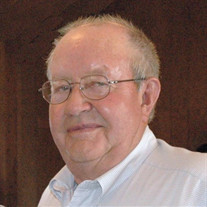 Louis F. Hesse, 88, who lived nearly three decades longer than he ever expected to, died Dec. 24, 2017,at his assisted living home in Moses Lake, Washington. He used to joke with his wife, Margaret, that there were some activities or travels that she would have to do “with her second husband” because he was sure he’d be gone by age 60, then 65, then 70. The joking ended in 2003 when Margaret was diagnosed with a rare liver disease. She died in 2007. Born Oct. 8, 1929, to Louis M. and Ella (née Farver) Hesse, young Louis grew up on the family farm at Scholls, Oregon, with no siblings and only limited memories of his father, who died in 1932. Louis graduated from Hillsboro High School in 1946 and earned a bachelor’s degree in agriculture from Oregon State College (now University) in 1950. He took over the family farm upon the death of his mother in 1951. Louis first met his future wife, Margaret Putnam, through 4-H and he often reminisced about their first meeting at age 12. They married about a decade later, on Dec. 26, 1951, at Trinity Lutheran Church in Hillsboro. They raised four children on their dairy farm: Louis M., Ann, Christopher, and John. During this time Louis was elected to the Groner Elementary school board. He served for many years on the finance committee of Trinity church and on the board of the Agricultural Stabilization and Conservation Service, an agency of the USDA. In the mid-1970s he and son Lou converted the dairy farm to hog production. In 1987 the family moved the entire operation to Moses Lake. In recent years, as the family shifted the business solely to crop production, Louis was proud that two of his grandsons are continuing the farming legacy into the sixth generation. Until the end of his life, the patriarch was always interested in what “the boys” were growing or harvesting on the farm. Louis was an avid reader with a lifelong interest in European history. He and Margaret loved to travel. They toured New Zealand and Australia in 1980 with their son John, who was attending Lincoln College in Christchurch, N.Z. Later the couple made multiple trips to Europe and cruised the Volga River in Russia and the Panama Canal. Louis and Margaret were also active members of Our Savior’s Lutheran Church in Ephrata. Louis is survived by his four children, all in Washington state: Lou (Debbie) Hesse of Moses Lake, Ann (Norm) Gosch of University Place, Chris (Pam) Hesse of Richland, and John Hesse of Ephrata. He is also survived by nine grandchildren: Dayna (Shane) Hall, Jenn Hesse, Ben (Kelli) Hesse, Lisa Hesse, Rachel (Josh) Kemp, Chris (Jen) Hesse, Josephine Hesse, Alex (Allison) Hesse, and Jacob Hesse; and 13 great-grandchildren. In addition to his wife of 55 years, Louis was preceded in death by a son-in-law, David Price, who also died on Christmas Eve, 30 years ago. His ashes will be interred next to his wife’s at Lewis Pioneer Cemetery at Farmington, Oregon. We would like to thank Penny Weber and her staff for their compassionate care of our father. Our dad came to feel it was home. Private burial will take place at Lewis Pioneer Cemetery near Hillsboro, OR, on March 17. A reception for local friends and family will follow at St. Peter's Lutheran Church at Blooming, near Cornelius, OR, from 2 - 4 PM. A full memorial service will take place at Our Savior's Lutheran Church in Ephrata, WA, on April 7th at 2:00 PM. It will be followed by a dessert reception in the fellowship hall.

Louis F. Hesse, 88, who lived nearly three decades longer than he ever expected to, died Dec. 24, 2017,at his assisted living home in Moses Lake, Washington. He used to joke with his wife, Margaret, that there were some activities or travels... View Obituary & Service Information

The family of Louis F Hesse created this Life Tributes page to make it easy to share your memories.