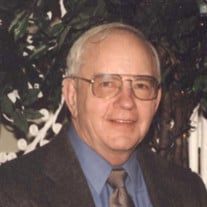 Lorin Cook Lybbert of Moses Lake passed away on Sunday morning July 8, 2018 at his home, surrounded by family. LorinCookLybbert was born March 28, 1928 in Raymond Alberta Canada, he was the 9th of 11 children born to Charles and LaPreal Lybbert. He lived in Raymond until he was 15 during this period the family relied on horse and buggy for transportation. When he was 15 the family moved north to Rosemary Alberta. Until 1946 when he was 18. In February of 1946 when he was a senior in they moved to Moses Lake. That was the first year a class graduated from the New high school, which is now Frontier middle school. His family farmed ground where I-90 and Hwy 17 intersects, where Walmart now stands and out off Hiawatha Road after high school he attended BYU in Provo Utah, until uncle Sam sent him his draft notice. He went into the army and spent time on the Korean peninsula. When he got out of the army he returned to Moses lake and met his wife Joan Berry from Warden they were married in May 13 1954 in the Cardston, Alberta Canada LDS temple. Now that he was married he needed a career so he went to barber school in Spokane for a year. When he finished school his first job was working for Glen hatch in Quincy, then he cut hair on Larson air force base until he acquired the barber shop in the vista village shopping center. He worked at his shop in Vista Village until he bought the shop on third avenue across from Frontier middle school. He cut hair there until he was 84 years old.During his years of cutting hair he made so many dear friends here in the Moses Lake area. He loved sharing stories and some of his jokes with them. He was known for his since of humor, handing out candies and a smile. In his younger years he played fastpitch softball. He was the pitcher. He played on the Army softball team while in the service. He also coached a couple baseball teams for his grandkids. He loved to be at their games. He enjoyed photography, fishing, gardening, but most of all his large family. He was an active member of the LDS 1st ward all of his adult life. Serving in many calling over the years,without a question his favorite was the time he spent at the Columbia river Temple in the tri-cities. He was a wonderful, kind, gentle, loving, fun father, grandfather and friend. He is survived by his 5 children Randal L. Lybbert (Mary), Carol Hill (Bill), Donna J. Ashby (Dennis), Lorna Callahan (Kelly), and Beth Wright (Carey). 25 grandchildren and spouses, also 52 great grandchildren and counting. One Sister Berna Law (Sheldon). Many nieces and nephews. He was preceded by his wife Joan, Parents Charles and LaPreal Lybbert, 9 brothers and sisters. The family would like to thank all of their friends and family for their love and support. The caregivers who were so kind and understanding. The Hospice staff for their help. Moses Lake Internal Medicine staff for all the years of care. Service will be held Friday July 13th at 10:00 at the Rose Ave. building of the LDS church. Viewing at 9:00-9:45 a.m. before the funeral.

Lorin Cook Lybbert of Moses Lake passed away on Sunday morning July 8, 2018 at his home, surrounded by family. LorinCookLybbert was born March 28, 1928 in Raymond Alberta Canada, he was the 9th of 11 children born to Charles and LaPreal Lybbert.... View Obituary & Service Information

The family of Lorin C Lybbert created this Life Tributes page to make it easy to share your memories.