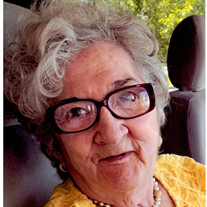 Loretta Marie Torres went home to Jesus October 5th of 2021. Born October 23, 1933 to Edward and Louis Duncan who were farmers and raised Loretta on the farm with her younger three brothers and two sisters Lee(deceased), David(deceased), George(deceased), Elizabeth(living) and May(living). Loretta's inheritance lives on by her five children; her two sons' Daniel Fischer and his Daughter Berlin, Mike and his wife Kerri Fischer and their two Daughters' Karlie and Kelsey. Lorettas' three daughters Connie and her husband Tom Moore and their Daughter Danni, Mona Fischer and her two children Caleb and Leah and Monica Fischer and her two children Billy and Salina. Loretta's wealth extends with her eleven great grandchildren as well. Early years, Loretta traveled to Mexico to work on the railroad as a telegrapher. Later moved to Twin Falls ID there she worked as waitress and married the chef Victor Carroll Fischer, Father of their five children. The family then moved to Washington State. Loretta later owned and operated a successful salon, The Red Apple. In the process of finding herself and enjoying the journey of life Loretta met the love of her life David Lee Torres along with meeting her forever love, Loretta came to know and live for her eternal Love Jesus Christ. Together David and Loretta ran a ministry called Straight Street Ministries helping with missions and getting people off the streets through deliverance from addictions. After David went home to be with Jesus Loretta cared for her mom who battled Alzheimer's which she turned into a ministry and business caring for patients in her home calling it Bethel House in Moses Lake, WA. Later following God's calling to be a full time missionary Loretta worked at an orphanage in Mexico as a nurse and teacher. She would travel to the high mountain villages and help treat the sick physically and spiritually by sharing the Gospel of Jesus. For the past Thirteen years Loretta has been battling Dementia/Alzheimer's under the care of her daughter Connie. Though the disease tried to take over her mind and body, Loretta's will and spirit remained strong and ignited with her love for the Lord and her family right up until the night she went home to Jesus. While being surrounded by her family and blanketed with her Praise and Worship music. Loretta was ambitious and a force to be reckoned with. Though she was five foot tall, she walked with dignity and class stretching her to be ten foot tall in confidence. Loretta's legacy lives on through her children, grandchildren and great grandchildren and the message that she lived by Jesus is the Way, the Truth and the Life. She will be always remembered for her laughter and dynamic charisma that she would use to share the Gospel of Jesus. Loretta Marie Torres is a woman after God's heart.

The family of Loretta Marie Torres created this Life Tributes page to make it easy to share your memories.