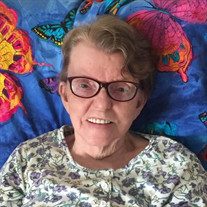 Lois Ann Nelson, age 79, long time resident of Moses Lake, Washington passed away Tuesday, July 21st. She will be laid to rest on Monday, July 27, 2020 in Washington State Veteran’s Cemetery, in Medical Lake, Washington. A visitation for family and friends will be at the funeral home Friday, July 24th, from noon to 4:30 p.m. Arrangements are in care of Kayser’s Chapel of Memories, Moses Lake. Lois Ann was born in Pocatello, Idaho on Friday, June 13th, 1941 to Charles Arnel and Daphne G. Byington. She was raised throughout southern Idaho. She was in the eighth grade when her family moved to Quincy, Washington. She enjoyed school and helping her mother with an early morning paper route. Lois Ann met James “Thad” Nelson at a Christmas Dance in 1958. They dated and were later married and sealed together in the Logan Temple on September 25, 1959. They lived in Ellensburg, Washington until Thad was finished with school. Once he became a teacher, they moved to Connell, Washington. Later, in 1978, they moved to West Valley City, Utah where she and Thad opened a hardware store with her sister and brother-in-law. They moved back to Washington settling in Moses Lake with their family in 1982, where she has continued to live and serve her church and community. She lived her last year and half at Avamere Assisted Living where she was known as "Ann". There she spent her days journaling and loved writing letters. Lois Ann was a member of the Moses Lake 2nd and 5th wards of the Church of Jesus Christ of Latter-day Saints. She served in many church callings throughout the years including in the Primary, the Relief Society, and Family History. She always enjoyed working on genealogy and reading family history stories. She had a love for sewing and quilting and has made many quilts, wall hanging, and baby blankets throughout the years. Lois Ann always had a garden and enjoyed both flowers and produce. For a number of years Lois Ann did child care in Moses Lake and loved caring for children. She is survived by four daughters and three sons and their spouses: Vicky Ann Crookston of Magna, Utah; Jacquelyn and Bruce Hirz of Moses Lake, Washington; Blane Nelson and Jeremy Flinders of Draper, Utah; Bruce Nelson and Bethany Williams of Moses Lake, Washington; Caralee and Barry Himes of New Plymouth, Idaho; Terry and Tara Nelson of Banks, Oregon; Tracy and Eric Foryan of Pullman, Washington; five brothers and sisters: Alvin Byington, Joyce Hicks, Kirk Byington, Dennis Byington, and Carla Loosle. She was the proud grandma of 11 grandchildren: Cherise (Calvin Boyd), Chayla, Maren (Michael Clark) Heidi, Marquel, Emelia, Emil, Gray, Jakob, Seth, and Ellis; and one great grandchild Kash Boyd. She was preceded in death by her husband James Thad; one daughter Geraldine Nelson; one son-in-law Stephen Crookston. The family would like to thank the staff and residents at Avamere Assisted Living for their care and friendship.

The family of Lois Ann Nelson created this Life Tributes page to make it easy to share your memories.