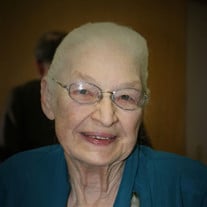 Linda B. Wheeler of Moses Lake, 88, died Sunday, March 12, 2017 at Samaritan Hospital in Moses Lake. Formerly, she had resided in Ellensburg and Othello. Linda was born April 29, 1928 in Sterling, Illinois to John and Julia Backman. She grew up in rural Minnesota and graduated from Wheaton High School in 1946. She worked as a telephone operator, then married John Hawley Wheeler on August 21, 1948. They farmed in Minnesota until moving out west to Seattle in 1956 with many members of John’s extended family. They made a loving and safe home for their four children wherever they lived, spending the longest time in Othello from the early 1970s until 2004. In each location, they made it a priority to find a church home. John and Linda were noted for their generosity, and many of the people they met became extended family. Linda worked in many occupations. She sold Avon products, was employed as a teacher’s aide, was a department store photographer, and served as a technician in a potato plant quality control laboratory. Her main goal in retirement was to keep family and friends connected, visiting many people and writing many notes full of encouragement and love. John,her husband, suffered disability and many health problems, and Linda was daily at his side through it all. She lost him in 2007; their marriage spanned some 59 years. Linda is survived by her four children (and their spouses)—son David Wheeler of Ellensburg, daughter Doris Corlett (Tom) of Fall City, daughter Dulcie Heinzmann (Max) of Moses Lake, and son Darwen Wheeler (Lori) of Othello. Grandchildren include Elizabeth Belisle (Don), Daniel Corlett, Andrew Corlett, Misty Fuller (Paul), Sarah Mendoza (Jack), Michelle Wheeler (Shelby), Erica Wheeler, Meredith Heinzmann (Cole Miller), and Makiah Heinzmann. Great-grandchildren include Victoria, Jace, Kiersten, Wyatt, Julianne, and Owen Belisle; Nickolas and Addisyn Fuller; Cinthia, Jackson, and Joselyn Mendoza. Linda loved gardening and flowers, sharing the beautiful things she grew with others. She is known far and wide as a gregarious, friendly, outgoing lady with a big heart, always guided by her faith in Jesus. While she leaves many dear relatives and friends behind, Linda has now joined those beloved who have gone before her. Open to all, a memorial service celebrating Linda’s life will be held at Immanuel Lutheran Church, 1020 South A Street, Moses Lake, Washington, at 2:00 p.m., Saturday, April 29, 2017. In lieu of gifts or flowers, memorial contributions may be made to Othello Christian Preschool, 835 South 10th Avenue, Othello, WA 99344. The family wishes to extend their gratitude to the health care personnel who helped Linda in so many ways.

Linda B. Wheeler of Moses Lake, 88, died Sunday, March 12, 2017 at Samaritan Hospital in Moses Lake. Formerly, she had resided in Ellensburg and Othello. Linda was born April 29, 1928 in Sterling, Illinois to John and Julia Backman. She grew... View Obituary & Service Information

The family of Linda Wheeler created this Life Tributes page to make it easy to share your memories.