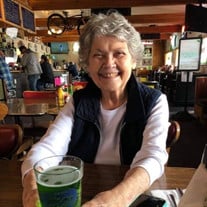 Linda Rae Fisher Tiffany, 84, of Moses Lake, Washington entered into rest on September 18 at Samaritan Hospotial in Moses Lake. Linda was born in Hugo, Oklahoma on May 12, 1937 to George K. and Nina B. Fisher. Her parents divorced when she was 5 and she and her mother moved to and settled in Durant, Oklahoma. After high school, Linda followed her love of music, enrolling at Oklahoma State University as a music major. It was at OSU she met and fell in love with Tom Tiffany, a handsome young airman who was attending Fire Safety School at OSU after the completion of his deployment to Korea in the US Air Force. When Tom graduated in 1958, they were married and off to Charleston, West Virginia where Tom was employed with Union Carbide as a Fire and Safety officer. In 1960 while still in West Virginia, Linda gave birth to her first son, Brad, and it wasn’t long after that Union Carbide moved their little family to Brownsville, Texas where their second son, Bryant, was born. Son number three, Mike, came along a few years after that. She loved being a stay-at-home mom, there was never a doubt for the love she had and showed for her family and her God. Every morning, before anyone else was up, Linda could be found at the kitchen table with her Bible and a cup of coffee, praying for them all. When Mike started high school, Linda went back to school, received a degree in education and a teaching certificate, and began her next career teaching in the Brownsville Independent School District. Through the years, Linda touched countless children’s lives, showing her students the same love and encouragement she gave to her own. She also passed along her love for music by teaching piano lessons in the living room after school. In 1983, after Union Carbide closed the Brownsville plant, they were transferred to Moses Lake, WA. where she resumed teaching in the Moses Lake School District. Eventually, she received a Masters degree in counseling and worked at the alternative school, a job that she loved more than any she had had as it allowed her to make a difference in the lives of so many vulnerable kids. All of this while caring for her ailing mother and still taking care of her own family. She and Tom eventually retired and continued to enjoy life in Moses Lake. In her later years, anywhere Linda went, she was greeted by friends and neighbors whose lives she had become a part of. Linda was predeceased by the love of her life, Tom, and her mother and father, George and Nina. She is survived by her sons Brad and his wife Kathy, Mike, Bryant and his wife Linda, grandchildren David, Megan, Sarah, Cam, Preston, Parker and Pyper, and a great granddaughter, Haisley. The family would like to extend a special thank you to Linda’s personal doctor, Dr. Pimentel Jahns; We could not have asked for a more patient, kind, and attentive care provider. Memorial service will be held at Moses Lake Presbyterian Church on Saturday, September 25th at 1 pm.

Linda Rae Fisher Tiffany, 84, of Moses Lake, Washington entered into rest on September 18 at Samaritan Hospotial in Moses Lake. Linda was born in Hugo, Oklahoma on May 12, 1937 to George K. and Nina B. Fisher. Her parents divorced when she was... View Obituary & Service Information

The family of Linda Tiffany created this Life Tributes page to make it easy to share your memories.