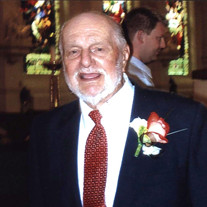 Lester "Cub" J. Baer, Lt. Col. (Ret.) USAF, 95, a resident of Moses Lake since 1970 passed away Friday, November 4, 2016 at Samaritan Hospital, his family at his side. Cub was born in Dubuque, Iowa on November 21, 1920, son of Bernard and Cecilia "Honey" (Grosstick) Baer. He was a decorated Army Air Corps USAF B-24 pilot in WWII, Korean War, Cuban Crisis and the Vietnam Conflict. On July 23, 1954 he married Camilla and she followed him in his various military assignments until moving back to Moses Lake in 1970. Cub was a member of the American Legion, V.FW. and N.R.A. He had a sense of humor and generous gentlemanly values. He was a loving husband to Camilla, a loving father to Shelley, Lee and Connie. He was always there when he was needed and a man you would want by your side in peace or conflict, in times of hardship or plenty. Our loss is Heaven's gain. Take care, Cub. You are now in the loving arms of your family who went before you. Jimmy Stewart (bomber pilot and actor) wrote about Lester in a book he published "Jimmy Stewart" Bomber Pilot. Pages 132 and 133 tell a story of Lester and is posted on this website where you can read the accounting. Survivors include his son, Lee H. Baer and daughter, Shelley A. Baer; grandchildren, Jada, Jasmyn, Lester, Dawn, Justin, Heather and Gabrielle; numerous great and great-great grandchildren. He was preceded in death by his wife, Camilla and daughter, Connie.

The family of Lester "Cub" John Baer created this Life Tributes page to make it easy to share your memories.