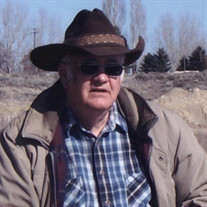 On May 29th 1939 Leo Curtis Gaddis was born in Huggins, Missouri to Curtis and Jessie Gaddis. He was raised there until the age of seven when his mother and father moved to Walla Walla, Washington. Leo was a graduate of Walla Walla High School and began working in the dairy industry at the age of seventeen. Leo continued working in the dairy industry for the next thirty five years, which brought him to Moses Lake, Washington in 1962. Leo was preceded in death by his mother and father, his granddaughter Nicole R. Springen, his sister Louise Baney (husband Allen), his brother in law, Vernon White, and In Laws Jim and Ruth Sherman. Leo is survived by his wife of over sixty years, Rochelle, his sister Leila White and his four children, Terri R. Zitka (husband Pete), Alana J. Frost (husband Michael), Jeffery “Dean” Gaddis (wife Jennifer), and Rick D. Gaddis. Brothers-in-Law, James Sherman (wife Doris), Steve Sherman (wife Magda) and families. Leo has fourteen grandchildren and twenty seven great-grand children and one great-great-grandchild. Leo was always loved by his cousins, uncles, aunts, friends and relatives. Leo was very competitive and enjoyed many sports to include Team Roping, Bowling, Horseshoes, Motorcycle dirt bike racing, Softball and he coached little league for many years. Leo loved to play music, especially to his children. He recently played with the “Sentimental Journey” band. He helped organize jam sessions at the block forty building, where families, friends and children would get together and enjoy playing music and learning to dance. Leo always enjoyed the outdoors, taking his children and friends fishing and hunting. Leo loved going to the mountains with his wife and family. Leo was a participating member and Elder of the church. Leo was always dedicated to his wife and his faith and instilled into his children the importance of God. Most importantly, Leo was first and foremost a family man. Leo bought a small farm northeast of Moses Lake where he enjoyed raising his family. Leo and Rochelle raised their own four children and brought sixteen foster children into their small eight hundred square foot home throughout the years. This was until those children could be reunited with their families. Leo would also take in other families who were in need with open arms. Leo was a man who always had a smile on his face, a hug to give, a stern hand when needed, but most importantly a heart of love. He always made sure he was teaching us morals, values, and hard work. Leo’s singing and guitar playing is a memory we will always carry in our hearts and we will miss dearly. We would give anything to hear him sing one more time. Leo passed away March 22, 2018 and left behind a legacy.

On May 29th 1939 Leo Curtis Gaddis was born in Huggins, Missouri to Curtis and Jessie Gaddis. He was raised there until the age of seven when his mother and father moved to Walla Walla, Washington. Leo was a graduate of Walla Walla High School... View Obituary & Service Information

The family of Leo C Gaddis created this Life Tributes page to make it easy to share your memories.