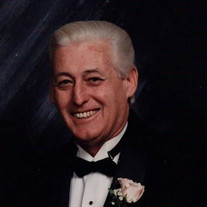 Lee H. Eslick, 80, of Moses Lake, passed away February 16, 2019. He was born December 15, 1938 in Seattle, Washington to Bruce and Margaret Eslick. Lee was raised in Ephrata, Washington. Lee was a three sport athlete at Ephrata High School participating in football, basketball, and track. After high school, Lee attended Central Washington University and was a member of the National Guard. In 1960, Lee married Sandy (Leonard) Eslick and they had 3 children; Kyle Ann Eslick of Moses Lake, Michael Eslick of Moses Lake, and Pattrick Eslick of Arizona. He later married Linda (King) Eslick who had 2 children; Aaron King of Moses Lake, and Kyle King of Moses Lake. Lee had 9 grandchildren, Blaine and Bailey Eslick, Brenden and Nicole Eslick, Zachary and Savannah Whaley, and Brynlynn, Connor and Collin King. Lee was a successful Realtor/Appraiser in the Wenatchee area and later moved to Moses Lake where he worked for Baron Realty. A few years later, Lee started his own business, Eslick and Associates. In 1989, Lee relocated to Phoenix where he was involved in the management and operation of a couple businesses, West Coast Hot Rod and Coast Energy. After 17 years of “fun in the sun”, he moved back to Moses Lake. He was an active Elks member where he did many fundraisers, dinners and dances. Lee was member of the Moses Lake-Othello Realtor Association (former President of the board) and the Moses Lake Golf & Country Club. He loved to golf and played in many tournaments. At one time, he was a course record holder at Three Lakes Golf Club. Lee was proceeded in death by his parents, Bruce and Margaret Eslick and brother, Jay Eslick. Services are being held Saturday March 2, 2019 at 3p.m. at the Elks Club in Moses Lake.

The family of Lee Harrison Eslick created this Life Tributes page to make it easy to share your memories.